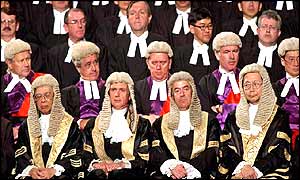 The Employee Union said that legislation on Article 23 would impair worker's political and basic rights.

At the same time, Mr. Bill Rammell, the newly appointed political affairs officer in Britain Foreign Ministry, is visiting Hong Kong. He said to media that he expressed British Government's concern over legislation under Article 23 of Basic Law to many officials of Hong Kong Special Administrative Region. The British Government Hopes that Hong Kong Special Administrative Region Government performs a broad consultation and carefully deals with legislation procedure. Otherwise, international community's confidence on Hong Kong will be shaken and Hong Kong will be negatively affected.

The debate over legislation on Article 23 does not stop because of the end of consultation period. Many people still express their opinions through various channels.

On this Friday (January 17, 2003), the Hong Kong Legislative Council continued debate for the third day on Hong Kong Government's annual report released earlier. During the meeting, in their speeches, some legislative council members called on the government not to legislate in a hurry but attentively listen to various opinions.

Hong Kong Catholic Church Bishop Joseph Zen also called all circles to be calm and impersonal in debating on legislation of anti-subversion law. He said that the government should also be objective and rational to deal with opposing opinions from various circles and truly understand their concerns.

Regina Ip Lau Suk-yee, Secretary of The Hong Kong Security Bureau said earlier that those opposing the legislation were to mislead public's opinion. For this claim, Bishop Joseph Zen said that the public is clear-minded and he did not want to make any comment. Bishop Joseph Zen hoped that anyone's speech would not hurt others and one would do something good for Hong Kong people.

Mr. Chen also refuted the parlance of Regina IP, Secretary for Security in her critique that the bar association bargained back and forth with the government on the legislation under Article 23. Mr. Chen said that Ms. Regina IP had a wrong position.