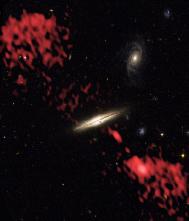 A wide view of galaxy 0313-192 and its surroundings, the radio-emitting jet is overlaid in red on the color image.

Giant jets of subatomic particles moving at nearly the speed of light have been found coming from thousands of galaxies across the universe, but always from elliptical galaxies or galaxies in the process of merging -- until now. Using the combined power of the Hubble Space Telescope, the Very Large Array (VLA) and the 8-meter Gemini-South Telescope, astronomers have discovered a huge jet coming from a spiral galaxy similar to our own Milky Way.

This spiral galaxy dubbed 0313-192 resides in a cluster of galaxies called Abell 428. "We've always thought spirals were the wrong kind of galaxy to generate these huge jets, but now we're going to have to re-think some of our ideas on what produces these jets," said William Keel, a University of Alabama astronomer who led the research team.

Now, the astronomers seek to understand why this one spiral galaxy, unlike all others seen so far, is producing the bright jets seen with the VLA and other radio telescopes.

In any case, the unique example provided by this jet-producing spiral galaxy "raises questions about some of our basic assumptions regarding jet production in galaxies," said Frazer Owen of the National Radio Astronomy Observatory.