(Clearwisdom.net) In December of 2000, a Falun Gong practitioner went home to Evansville for a holiday visit and to give workshops to introduce Falun Gong to the public. Afterwards, the Mayor Russell G. Lloyd, Jr. issued a proclamation honoring Falun Gong.á Later, one practitioner from St. Louis, Missouri went to Evansville for months to continue local Falun Gong classes.á But he stopped doing that due to busy schedule.

Recently, a practitioner originally from Evansville returned to her hometown to visit her family and to re-introduce Falun Gong to the public.á On the 4th of July (US Independence Day), the practitioner went to a local fireworks event wearing her yellow Falun Gong t-shirt.á She happened to see the Mayor of Evansville giving a short speech, where there were over 300 people watching and listening. She remembered what a kind person the Mayor was and thought, "I have to thank him for giving a proclamation for Falun Gong Day on December 27, 2000."á She came up to him and said, "Thank you, from the bottom of all Falun Gong practitioners' hearts around the world for giving a proclamation to us."á The Mayor said with a smile, "So you were theáone who had written the letter to me."á The Mayor continued to say that, "I received a nasty letter from the Chinese Communist Party, saying I shouldn't have given you that proclamation. I wrote them a letter right back and said that our country was founded on the basis of freedom of religious belief."á The practitioner was about to say something about the differences between religion and cultivation practice, but then the Mayor said to her, "As soon as I saw this information on Falun Gong, I knew that this is something very important to stand up for." The practitioner suddenly realized how important it was for her to clarify the truth in Evansville, Indiana.ááShe has started a class and plans to talk to farmers, the city and state government, so that they may know the urgency of this worldwide persecution.á Another proclamation was given to Falun Gong and Falun Dafa Week will be celebrated September 1st through September 7th, 2002.

, the practice of Falun Dafa is designed to help improve a practitioner's body and spirit through exercise and meditation based upon the universal principles of "Zhen-Shan-Ren" (Truthfulness, Compassion, and Forbearance); and

, Falun Dafa has helped millions of people improve their health, upgrade their moral standard and deepen their understanding of humanity and the universe; and

, Falun Dafa's contribution to society has been widely recognized and honored by the world since Mr. Li Hongzhi introduced it to public in 1992; and

, Falun Dafa transcends cultural and racial boundaries and contributes a dream of a peaceful, tolerant and more compassionate society; and

, Falun Dafa practitioners' determination and courage to stand up for Truth, Compassion, and Tolerance under the most severe environment reminds us of the value of freedom and the preciousness of human dignity.

in the City of Evansville, Indiana and urge all citizens to participate in the celebration of Falun Dafa and understand the three universal principles -- Truthfulness, Compassion and Forbearance.

IN WITNESS WHEREOF, I have hereonto set my hand and have caused the great seal of the City to be affixed this 1st day of September in the year of our Lord two thousand and two. 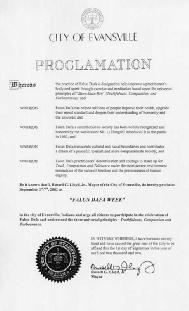