For the past three years I have followed the brutal persecution of Falun Gong followers by the Chinese Government. The propaganda that has been sent to this office from the Chinese Embassy has been exceptionally vicious and very upsetting in its content.

To date over 466 Falun Gong practitioners have died while under arrest and hundreds more are currently imprisoned and tortured in forced labour camps and many others have simply "disappeared".

Even Canadians are not exempt from this persecution, a brother and sister form our neighboring city Barrie have been arrested and imprisoned in China for practicing these basic principles.

Please continue to speak up against the atrocities that are taking place in China and urge all countries attending the APEC meeting to put pressure on the President of China Jiang Zemin to end the brutality. 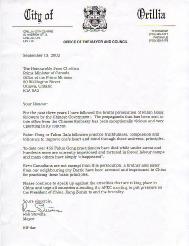