Yangtze River on the Verge of Bursting Its Dikes (Photo)

(Editor's Note: We are greatly saddened and troubled by the large-scale loss of life and property in China due to the raging floods. Even though China's state controlled television programs are repetitiously chanting empty political slogans while various levels of government officials put on a show of "disaster relief," we see clearly that Jiang and his corrupt officials at each level of government are concentrating their efforts on embezzlement, fraud, bitter power struggles, and persecuting innocent people. Each year there are disastrous floods, followed by "disaster relief efforts" that are too little, too late. Yet these tragedies have been turned into opportunities by Jiang and his cronies to glorify and promote themselves. If they had a shred of a sense of responsibility for the welfare of the common folk and the future of the Chinese people, then the tragedies occurring as a result of the floods in Hunan could have been avoided to a large degree.

The ancients in China emphasized the relationship between man and the heavens, and often drew a direct correlation between a despotic regime and natural disasters. Whenever large-scale disasters occurred, it was commonly believed to be caused by the ruler's greed and atrocities, and the rulers themselves were often forced to admit their culpability, at least in name, to the heavens and to the people. Over the past three years, the disastrous floods in Mainland China have become more and more severe. Meanwhile, over the same period of time the Jiang regime's persecution of the kind people who cultivate "Truthfulness-Compassion-Tolerance" has become more and more vicious -- Jiang's political group has exhausted great amounts of the country's and the people's resources in order to persecute Falun Gong practitioners, creating countless bloody tragedies. Can this be a coincidence? The widespread suffering caused by the floods in China can certainly be attributed to the corruption and incompetence of Jiang's regime, but the deeper reason may well be the persecution being carried out by this evil gang against innocent Falun Gong practitioners. While the dictator is desecrating the laws of heaven, it is the people under him that suffer as a direct consequence.

No matter from what angle, it is clear that under Jiang's despotic rule, the victims are not just limited to Falun Gong practitioners but all innocent people, inside China or abroad, that are within his reach. For the sake of our collective future, let us stop the violence being perpetrated by Jiang's regime together.) 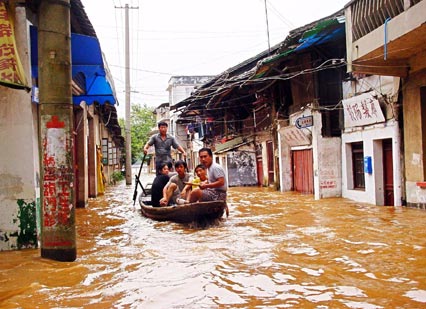 “The Courier: County residents get familiar with Falun Gong”