Photos: A Shandong Practitioner, Ms. Zhao Fengying's Face Burned by a Policeman with His Cigarette

Ms. Zhao Fengying used her own experiences to validate Falun Dafa. On March 6, 2002, she began her trip to Beijing to appeal for Falun Dafa in accordance with the law. On March 7, she arrived at the Weifang train station and took a bus around 3 pm towards Beijing. Around 5 am on March 8, she arrived at Beijing. She was abducted in a hotel at about 3 pm. Around 8:30 pm, the wicked policeman, Song Shuling started beating and kicking her. At about 11 pm, Song Shuling grasped Ms. Zhao Fengying's hair and used his cigarette to burn Ms. Zhao's face about 30 times. At about 6 am on March 10, 2000, Ms. Zhao was sent back to Weifang. The photos of Ms. Zhao below were taken at the Hongshagou Police Station around 8AM on March 10. 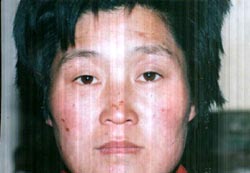 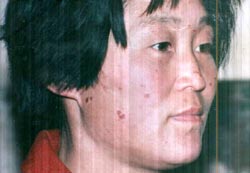