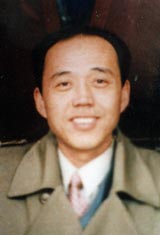 Falun Dafa practitioner Lu Zhaofeng, male, 39 years old, was a resident of Liuzhuang Village, Nientou Township, Daming County, Hebei Province. He was arrested on August 28, 2001 (all dates lunar calendar) by the County police and sent to the Handan and Gaoyang Forced Labor Camps where he was tortured and made to do heavy labor. The labor camp sent him home around April 2002 when his life was in danger. He left the world on the evening of June 30, 2002.

Lu Zhaofeng started to cultivate Falun Dafa in April 1998. He felt deeply that the Great Law should be known by more people after he obtained Falun Dafa himself. He went downtown to the capital of Daming County to spread Dafa and instruct people how to do the exercises many times. He also helped organize experience sharing conferences in Wei County, Hebei Province, Nanle County, Henan Province, and Guan County in Shandong Province, so that Falun Dafa disciples could make faster progress together. He always strictly disciplined himself and cultivated his xinxing [moral character; mind nature] according to the principle of Truthfulness, Compassion, and Tolerance. Although his family was in a difficult situation financially, he still used his own money to buy Dafa books and copy Dafa materials.

Below are some facts showing how the evil forces persecuted him inhumanely during the past three years.

On April 25, 1999, he went to Beijing to clarify the truth to the central government, in order to safeguard Falun Dafa. On July 19, 1999, the police from Daming County locked him up in the Nientou Township police station for 7 days to prevent him from going to Beijing to appeal again. Later, police transferred him to Daming County Detention Center and illegally detained him for 13 days. On October 11, 1999, police from Daming County and Nientou Township deceived him and lured him to the Daming County Police Station. He refused to cooperate with any of the evil police's requests, orders, or directions . He was later forcefully sent to the police station in Nanle County, Henan Province, where the police locked him up for 4 months in the Nanle County Detention Center. During those 4 months, he actively spread Dafa to prisoners and the police, telling them the true facts about the persecution. Four or five of his cellmates obtained Dafa and started cultivation because of his influence. One of them was only a little over 20 years old, and his third eye was opened after cultivating only a short period of time. Lu Zhaofeng was released unconditionally in February 6, 2000. The vicious police extorted 1000 Yuan from his family as a deposit and 800 Yuan for his living expenses while in police detention. This money was never returned to him.

On August 28, 2001, around 8-9 AM, policemen from Nientou Township, Gao Zhanshi, Zhou Qingwen, and one more, raided Lu's home. They found printing equipment in his home, and charged him in the Daming County Police Station. Around 11 AM, more than 10 police vehicles came from the County Station, along with several dozen police. They seized the computer, copy machine, TV, cell phone, pager, truth-clarifying flyers, and CDs. They forcibly arrested Lu Zhaofeng and his fellow practitioners Li Haishan and Huang Yanhong, and took them away in three police vehicles. Police carried him back to the Nientou Township Government offices for temporary detention. On the morning of August 29, 2001, Director of Nientou Township Police station Zheng Zhangshe and Township political-judicial secretary Ren Xuexian locked him in a motel in Daming County and then sent him to Handan Forced Labor Camp in Hebei Province.

In Handan labor camp, police asked him to wear a helmet and then severely tortured him by kicking him with leather boots, beating him with a rubber baton, and depriving him of sleep. They also held criticizing meetings in an attempt to shake his righteous faith. During those criticizing meetings, he validated Dafa many times, exposed the lies, and helped many Dafa disciples who wrote "Guarantee Letters" [A statement to declare that he or she is remorseful for practicing Falun Gong and guarantees not to practice Falun Gong again, not to go to Beijing to appeal for Falun Gong, and never again associate with any Falun Dafa practitioners] under high pressure to awake again and come back to Falun Dafa cultivation. His righteous beliefs and righteous actions frightened the evil forces. They cruelly tortured him for 12 days and then transferred him to Gaoyang Forced Labor Camp (in Hebei Province).

In order to force him to give up Falun Dafa cultivation, police in Gaoyang Forced Labor Camp gave him more severe torture, such as brutal beating and putting him outside in the cold to freeze. However, Lu Zhaofeng always validated Dafa and exposed the evil. Once the authorities threatened, "If you still refuse to be transformed, we will bury you alive." He was not scared a bit; instead, he defended Dafa with his life. The evil gang in the labor camp was scared of him whenever they saw him.

But the illegal long-term imprisonment and heavy labor made his body very weak. Because he absorbed poisonous dye solvent in his work, he often had a cough, difficulty breathing, and he could not eat normally for three months. He was as thin as if only skin and bones were left. He could not even take care of his own personal needs, but the labor camp still refused to release him. They gave him infusions and injections (they said one tube of antibiotic daily) to sustain his life. At last, when they saw he was dying, they allowed him to be bailed out for medical treatment (he was diagnosed to have heart disease and tuberculosis). His family took him home on April 12, 2002.

Because of the long-term torture he received in the labor camp, his legs were swollen and in pain, and often seized with cramps. He was suffering from muscular atrophy and difficult breathing. He continued to become weaker and weaker, and finally left the world around 9 PM on June 30, 2002. During this period of time that he was dying, he still clarified the truth to his friends and family who came to visit him, and exposed the evil torture that he received. In the last minutes before he died, he was reciting Master's Fa-rectification verses. At 5 AM on July 1st, 2002, a red aura covered half the sky. His mother and many people in his village all saw this miracle. At 6 PM on July 1st 2002, his funeral started, and it rained heavily until the funeral ceremony was over.

Names of the People Responsible for the Persecution: