One after Another, Over One Hundred People Have Died from Cancer Due to Water Contamination in a Village in Henan Province (Photos)

(Clearwisdom.net) During the last two years, Henan Province has become well known to the world because Liu Chunling and her daughter, Siying, were from there. Both mother and daughter were players in the Jiang regime's staged Tiananmen Self-immolation incident. In addition, within this province, more and more farmers have contracted AIDS due to needle contamination as they came in droves to sell their blood for needed income. Of course, the government intentionally does not disclose this fact. 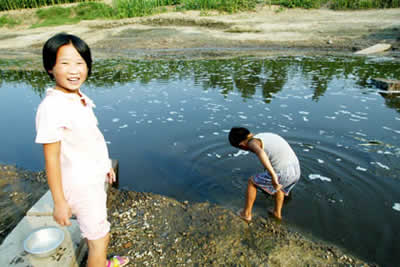 The following true story occurred in Beilaoguan Village, Jun County, Henan Province. Li Xiuchen, 66 years old, was diagnosed with enteric cancer last November. Her sons and daughters came to her aid and borrowed money from many sources for her treatment. After she learned that her treatment had already cost nearly 30,000 Yuan (average income for the villagers is less than 400 Yuan per year), she decided to stop the chemotherapy in the middle of treatment, as she did not want to deplete all the family resources, leaving them in debt after her death. Her utmost wish is that her grandson will enter college and excel in his life, beyond the confines of the village and village life. 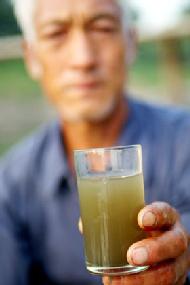 The water obtained from a 3-meter deep well was determined to be not drinkable after being tested by the Epidemic Prevention Department.

reported on August 22, 2002 that Beilaoguan Village is located at the confluence of the Wei River and a man-made dyke. Beginning in the 1980s, many paper mills were built in neighboring counties. Differing in size, most of them are privately owned or contracted. In neighboring Hua County, there are at least five of these paper mills. These mills discharge wastewater without meeting the standard health requirements and some don't even have wastewater treatment facilities. They discharge wastewater directly into the river, causing severe contamination. Many villagers along the river develop enteric cancer, esophagus cancer, liver cancer, and stomach cancer etc. The situation is more severe in Beilaoguan Village located at the confluence of the river and the dyke. During recent years, over one hundred people have died of cancer, one after another, and the village has come to be known as a "cancer village."

The villagers reiterated that the river was clear in the past and they drank water from it and used it to irrigate their crops. At that time, there were fish, shrimp, and turtles in the river. Kids also played in the river joyfully. But now, the water has become dark brown and there is a thick layer of yellowish foam on its surface. During the summer, one can smell the stench of industrial waste in the river, even with windows and doors shut!

Irrigating crops with the water has not only reduced crop yield but also salted the earth. The contaminated river has infiltrated all the lands of the village and contaminated the underground water reserves as well. The wells that the villagers dug themselves are generally 12 meters deep, but no matter how deep they dig now, their efforts are futile. After being tested by the Epidemic Prevention Department, it has been admitted that drinking such water is suicide. There are 1,127 people in the village with an average annual income of 300-400 Yuan. Thus, digging deep wells is impossible for them, as the cost is prohibitive, and they cannot relocate either, for the same reason. Over ten years ago, there was only one cancer patient in the village. However, during recent years over one hundred people have died of cancer one after another. Last year, 17 died of cancer and 8 have died in the first half of this year.

A reporter visited 66 year old Sun Xiulan and her family, living in one of the shabby dwellings in the village. Sun has a bed-ridden, disabled son and her husband died of cancer a few years back. Three years ago, her oldest son (37 years old), and his wife, contracted lymph cancer from drinking the contaminated water. He died, and 5 days later, his wife also passed away, leaving behind two daughters. This year, the two sisters, ages 10 and 7, may have to discontinue their studies in school because the family cannot afford to buy books.

As a grandparent, Sun Xiulan's duties now include taking care of the crops, watching after her disabled son, and raising her two granddaughters. All of this is difficult for a 66-year-old woman. Every year the small amount of support she receives from the civil administration department is hardly adequate for their daily life. The family's life is extremely hard. For over half a year, they have not eaten meat and the noodles for the children are usually cooked with only a few pieces of vegetables. As an ironic display, a metal sign of the Chinese character for "good luck," hangs on their front door, all but rusted through.

When the headlines of the front page in Xinhua News broadcast claimed that many Chinese people have started to live well-off, and people living in Shaihai have purchased homes, 152-meter deep well was finally dug in Beilaoguan Village in June of this year! The villagers were of course very happy but anxiously awaited for the government to bring drinkable water to their homes. They are still waiting.

In the end, when the reporter traced the contaminated river to Hua County, he came across a slogan on the front gate of one of the the paper mills which read, "Protect the Environment". Behind the gate, in full view, industrial wastewater could be seen discharging continuously into the river.