(Clearwisdom.net) According to recent discoveries, scientists believe that a giant eruption occurred in the Centaurus A Galaxy about 10 million years ago. Now NASA's Chandra X-ray Observatory has found the remains of that explosion in the form of the enormous arcs of hot gas. This discovery can help astronomers better understand the cause and effect of violent outbursts from the vicinity of supermassive black holes in the centers of many so-called "active" galaxies. 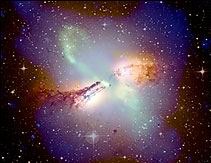 NASA's Chandra X-ray Observatory and Hubble Space Telescope captured a marvelous spectacle of a titanic explosion in the Centaurus A Galaxy. A composite image of the galaxy made with radio (red and green), optical (yellow-orange), and X-ray data (blue) presents a stunning tableau of a tumultuous galaxy.

Scientists proposed that the orientation of the arcs of hot gas perpendicular to the jet and the symmetry of the projected ring with respect to the center of the galaxy could be evidence that the ring is the result of a giant eruption in the nucleus of the galaxy 10 million years ago. The age of 10 million years for the outburst is consistent with other optical and infrared observations that indicate that the rate of star formation in the galaxy increased dramatically at about that time.