Letter from Lord Moyne of the United Kingdom to the Hong Kong Authority [March 27, 2002]

There will be considerable concern in many countries of the world at the news that police have charged twenty members of the Falun Gong with obstruction.

It is true that the group is now illegal in the rest of China, but in Hong Kong it is still permitted. The suspicion will therefore arise that the police are under orders from Beijing to introduce a de facto ban by the back door, using police action, so as to preserve a fa ade of tolerance for the sake of Hong Kong's international relations.

Such a maneuver would be seen through at once. The Falun Gong now have members in most countries of the world, many of whom are not ethnic Chinese, and an even greater number of well-wishers. Such people see the fact that Falun Gong is permitted in Hong Kong as rendering the attitude of the Beijing Government in this matter more acceptable. It is certainly a solid piece of evidence that the self-government of Hong Kong is a reality.

If the case against these Falun Gong practitioners is pursued, it will make the self-government of Hong Kong seem a sham. Worse, it will appear that the rule of law itself is a sham because it will have been overridden by an arbitrary action of the police.

Obviously you are in a difficult position, but it seems that the special status of Hong Kong is regarded by the Beijing authorities as being advantageous to China. This being so, there would seem to be a good case for releasing the twenty accused without further charge. I hope you will arrange for this to happen. 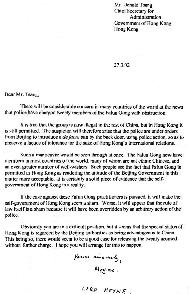