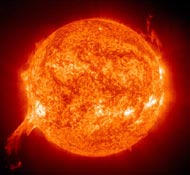 According to reports from Dayoo Net, NASA captured a huge, curling solar prominence in extreme ultraviolet light (ionized helium at 304 degrees erupting from the Sun on July 1, 2002. For a sense of scale, the prominence seems to extend at least 30 Earths. Scientists said that this burst took place at 13:19 GMT on July 1. In addition, the left lower part of the photo taken by the man-made satellite SOHO looked like a leg. Scientists explained that could be the prominences of the burst.

It was reported that if that gigantic solar prominence flew toward the earth, it could completely destroy the earth's magnetic field.

“Six Hours in Warsaw, the Capital of Poland (Photos)”