(Clearwisdom.net) On the third anniversary of July 20th, Falun Dafa practitioners from the central and southern parts of Germany gathered in Munich, holding a one-day commemorative activity to clarify the truth to the public and to expose the Jiang regime's brutal persecution of Falun Gong practitioners over the last three years. 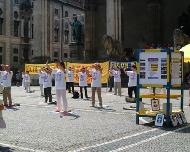 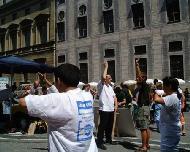 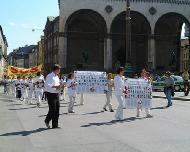 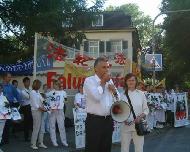 On Saturday morning, Falun Gong practitioners gathered at the Odeon Square in downtown to hold a large-scale exercise demonstration and to collect signatures on a petition. Once each hour through a loudspeaker we introduced to passersby the truth about how Jiang launched this evil persecution and the peacefulness displayed by Falun Gong practitioners inside and outside China in the face of the persecution. We also expressed our thanks to people who supported us.

An official from the International Association of Human Rights gave a speech in support. In the afternoon, the practitioners held a parade beginning from the Square, passing through the downtown area and heading to the Chinese Consulate to call for the rescue of the imprisoned practitioners in China. The solemn, serene procession attracted many passersby and some of them followed us to the Consulate. Some said to practitioners, "You have done very well. It has been quite a long time that I have seen so many kind faces." In front of the consulate, the practitioners practiced the exercises, sent forth righteous thoughts and sang "Falun Dafa is good." The official of the Munich Chapter of the International Association of Human Rights along with practitioners delivered a letter to the Consulate's letterbox. In the evening, the practitioners held a candlelight vigil in front of the Consulate. It just so happened that a group of middle school students from China came in a big tourist bus to the Consulate. Before finishing their European trip, they had an opportunity to learn the truth about Falun Gong.

“On the Third Anniversary of July 20th, Many People with a Sense of Justice Gather in Dublin, Ireland (Photos)”