Double Rainbow at Dawn in Beijing 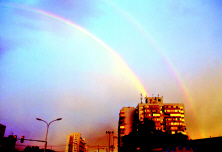 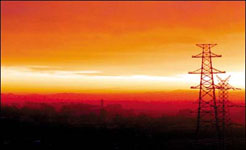 Shortly after 4 a.m. July 13, 2002 (Saturday), before the sun rose, the northeast sky of Beijing city had a beautiful dawn of many layers. The bottom was bright green. The higher, the color changed to redder and darker. It started from orange red, to bright fire red to deep red, then rosy red and purple red. The scene was tremendously impressive. Close to 5 o'clock, in the sky to the southwest of Beijing, there suddenly appeared a colorful rainbow. It looked like an arch bridge; the color was bright and transparent and the rainbow span crossed over half of the sky. To make it more special, there was another rainbow above the rainbow, but it was darker than the previous one. Two parallel rainbows floated facing the northeast dawn, the scene was magnificent. At 5:03 a.m., the rainbows disappeared quickly and the dawn faded shortly after.

Beijing Morning Newspaper reported the scene. It said that some residents who got up early to do exercises called the newspaper to inform this abnormal scene. One senior Beijing resident told reporter that such red and colorful dawn was rare in Beijing.

“With Righteous Thoughts, Dafa Practitioner Walks Out of Prison”