According to report from a CNN China Analyst, in a glaring instance of money-aided "great power diplomacy," Iceland banned [practitioners] of the Falun Gong spiritual [group] from entering the country during President Jiang Zemin's visit last week.

Reykjavik turned away at least 60 Falun Gong [practitioners], saying it did not have enough police to protect the Chinese VIP.

The move led to angry remarks from the U.S. State Department, as well as protests by human rights groups, who said Reykjavik had bowed to Chinese pressure and put economic benefits above its commitment to global norms on civil rights.

But this is not the first time that Beijing has used the business card to score diplomatic points.

With the United States no longer a member, no European country was willing to take the heat -- and the threats of Beijing withdrawing trading and investment opportunities.

According to the report, [the] Party (CCP) leadership first demonstrated what its critics called bullying tactics in 1997, when Denmark was bold enough to move a resolution slamming Beijing's treatment of dissidents and ethnic minorities.

At that time, a spokesman of the Chinese Foreign Ministry said: "This anti-Chinese resolution will, I think, in the end become a rock that smashes on the Danish Government's head."

Beijing went on to cancel all commercial contracts with the Scandinavian nation. A year later, Copenhagen, and quite a few other European capitals, apparently wised up.

Since then, the CCP administration has dangled supposedly lucrative trading and investment prospects to achieve a plethora of goals. 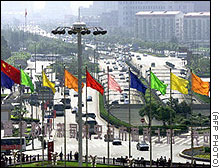 However, in waging big-bucks diplomacy, Beijing has to bear in mind that economic might does not necessarily make it right.

In fact an excessively aggressive use of this strategy could backfire.

The report also addressed that "Money isn't everything".

According to the report, an aspiring superpower also needs some strong claims to a moral high ground that is based on recognized international norms.

After all, in his treatises on governance, Confucius laid much more store on moral authority than economic prowess or brute military force.

It is also instructive that in the mid-1980s, China's heyday of political reform, the avant-garde Shanghai newspaper World Economic Herald ran a series of articles on the issue of qiuji, or membership in the community of nations.

The liberal paper's conclusion was that to earn its place in the sun, China must, in addition to an economic leap forward, attain high standards in areas such as political liberalization and human rights.

Jiang, then mayor of Shanghai, won Deng's praise for "ideological rectitude and resoluteness" for suppressing the Herald even as students in Shanghai and Beijing campuses were holding unprecedented large-scale pro-democracy demonstrations.

It is perhaps difficult for Jiang, whose spirits must have soared above the Icelandic volcanoes last week, to appreciate the fact that economic or military clout needs to be tempered with a Confucianist -- or "Western" -- precept of morality and democracy.