(Clearwisdom.net) In the human world, large-scale violence and barbarism must lead to punishment from heaven. The sandstorms occurring in Beijing are the direct result of the evil political movements in China. From the years of 1955 to 1959, China went through the so called "Three opposition," "Five opposition," and "Movement against the right wing;" From 1965 to 1976 was the ten-year great Cultural Revolution; From 1999 until the present is the brutal torture against Falun Dafa and tens of millions of Falun Dafa practitioners. These three periods are exactly the times when sandstorms have been the most severe in Beijing. Additionally, in the three consecutive years of 1999, 2001 and 2002, the storms have lasted the longest in recorded history, and this has not been seen in fifty years. Even more shocking is that the intensity of the sandstorms early this year is unprecedented, indicating that the crime against Falun Dafa and its practitioners far surpassed the great Cultural Revolution, the "three opposition," the "five opposition" and the movement against the right wing. 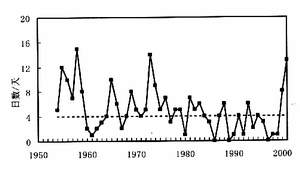 Here we cite the data collected by the Chinese central weather channel. This graph shows the number of days that sandstorms occur each year. It covers the past forty-eight years from 1954 to 2001.

We can see that the periods when the sandstorms last the longest each year are 1955-1959, 1965-1975 and 1999-present. The average [length of sandstorms] over these forty-eight years is four days per year. However, the average is 11 days per year over the five years of 1955-1959 and 7 days per year during the ten years of the Cultural Revolution. And over the two years of suppressing Falun Dafa, the average is 12 days per year. During the three periods of evil political movements, the strong sandstorms are 2-3 times above average. When we look at the ten years when strong sandstorms occur most frequently, we will see that the average length of the sandstorm is over 8 days per year. Among the 10 years, four years are during the period of the political campaigns called the, "Three opposition," "Five opposition" and "Movement against the right wing," namely, in 1955, 1956, 1958 and 1959 respectively. And another four years are among the ten-year long political campaign of the Great Cultural Revolution. They are the years of 1965, 1969, 1973 and 1974. Another two years are 2000 and 2001 when the suppression of Falun Dafa took place. The ten years when the sandstorms occurred most frequently unexceptionally all coincide with the time when vicious political movements were taking place.

In the past three years, the sandstorms not only happened more frequently, but also their intensity reached the highest level in forty-eight years. This year has been recorded as the most intense on record. A sandstorm occurred in Beijing of a magnitude that has been unseen in the past forty-eight years.

To explain the unusual sandstorm phenomena in the past three years, scientists proposed two possibilities: One is that the northern area is becoming dry and arid. The other possibility is that the strong wind comes along with the cold air moving to the south. These theories were put forth to be the two direct reasons for the sandstorms. But they cannot explain the fact why the pattern changes in different years and why sandstorms are the most severe during the years of political movements. We see that the sandstorm occurs the least during 1980-1990 and the most during 1950-1960. But at the same time the desert area has drastically expanded in 1980-1990 compared to 1950-1960 and the strong wind coming along with the cold air moving to south is not as frequent in the past three years. The unusual sandstorm is truly not a natural phenomenon.

The sandstorms reveal to human world: It is evil to brutally torture and suppress Falun Dafa and tens of millions of practitioners. The complications resulting from the political campaigns of the, "Three opposition," "Five opposition" and "Movement against the right wing" have left their marks until today. The suppression of Falun Gong practitioners by the Jiang's regime is still continuing. Every day there are practitioners who believe in "Truth, Compassion, Tolerance" and are tortured to death for that belief. Hundreds and thousands of practitioners are suffering in jail and their lives are in danger. We hope kind people can enlighten to the compassion and message from heaven. Let us work together to end this crime against humanity.