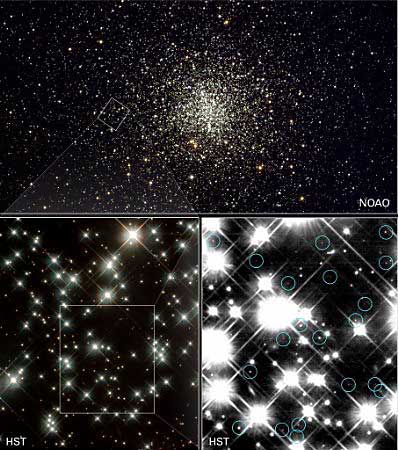 The square outlined in the lower left of the first photograph above is enlarged on the left, and the indicated region is enlarged again, above on the right. The region highlighted is about 1 light-year distant. In this region, the Hubble telescope detected dwarf stars, shown within the blue circles in the photograph above.

reported on April 25, 2002 that based on information gathered from the Hubble telescope, NASA astronomers believe that the universe was formed 14 billion years ago, plus or minus 500 million years. The astronomers said that the calculations making use of new data confirm the results of previous calculations made with earlier data.

Astronomers studied a group of globular celestial bodies about 7000 light-years away in the constellation Scorpio. Scorpio is thought to be the oldest of celestial structures in the universe, having formed about 1 billion years after the Big Bang.

The astronomers said that there are many so-called dwarf stars in these globular celestial bodies. Dwarf stars are so-called because they are entering a dark stage, having burned most of the nuclear fuel in their cores. The rate of the decreasing surface temperature of the stars can be predicted and is the key to calculating the age of the universe. The astronomers calculate the age of the stars based on their current brightness.