I have indeed received your correspondence dated February 22, 2002, by which you have brought my attention to the repression carried out by the Chinese authorities against Falun Gong practitioners.

France and the European Union, aware of these repressions, and, more generally, of all the attempts made against Human Rights in China, are vigilantly following this case.

As for me, I am indignant about such practices and remain at your disposal for any intervention, within the boundaries of my prerogatives, that you would deem useful.

Assuring you of my support,

I wish you all the best, Sir. 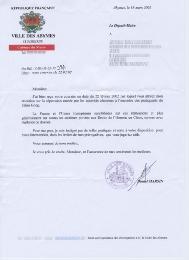 “Letter from French Minister of Education on Zhao Ming's Release”