, Falun Gong is an ancient form of Qigong, the practice of refining the body and mind through special exercises and meditation. Qigong, like Tai Chi, is a vital part of many people's lives in Asia; and

, The inculcation of firm and virtuous moral standards, as taught in Falun Gong, benefits society and promotes an honest, kind, and tolerant concern for others; and

, Falun Gong is a self-improvement practice rooted in ancient Chinese culture; it was first introduced to the general public in 1992 by Mr. Li Hongzhi, and consists of four gentle exercises and a meditation; and

, The Falun Gong philosophy espouses the idea that when the heart is pure, the mind balanced, and the body energized, health and happiness are a natural outcome; individuals have been empowered to leave behind addictions and bad habits; families, to live in peace together; and communities, to embrace what is virtuous and life-affirming; and

, Since Falun Gong's introduction, the practice has reached millions of people in 55 countries; It first came to New York in 1996, and local practitioners have given many free seminars to teach communities about the benefits derived from the meditation and exercises; and

, Today, as social pressure and urgencies escalate, citizens feel the need to find tools that will promote better health and moral living; improvement in these two areas as individual, in turn, will improve communities as a whole; now therefore, be it

, That I, Scott Stringer, Assembly Menber of the 67th Assembly District of New York, urge all New Yorkers to be aware of the contributions Falun Gong has made to make our world a better place to live and the countless lives they have touched here and abroad; and be it further

, That May 13, 2002, is world Falun Dafa Day, where people from around the world in 55 countries come together to celebrate the values of Falun Gong. 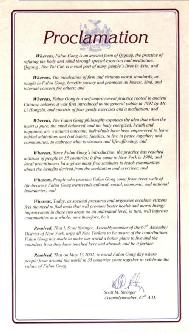