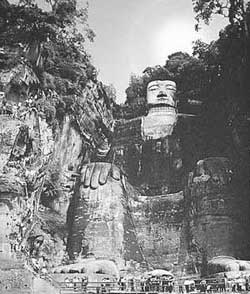 Yesterday at 9:43am on May 6, after a day of heavy rain, a colorful ring of light appeared in the cloudy sky above the Leshan Buddha Statue. The ring had a diameter of approximately 300 meters with an interior red ring and an exterior purple ring. The color of the ring was sometimes clear and sometimes blurry, and circled the Buddha Statue while emitting colorful beams of light. The tourists around the Buddha Statue were very excited and eagerly watched this miraculous scene.

At 11 o'clock, the ring started to emit a dazzling light. Such a magnificent sight impressed the tourists who had come from all over the world and prompted many people to press both of their hands together and close their eyes to pray. Around noon the Buddha light disappeared. The scene lasted for more than three hours.

The people of today's modern society often claim, "I will believe in what I can see." Can this miraculous scene that was witnessed by thousands of people remind them of this common saying? Now will they believe in the existence of Buddhas and their magnificence?

“Spreading the Fa in Nara, a Japanese City with an Ancient History”