City of Lake Worth
Lake Worth, Florida

WHEREAS, Falun Gong (also known as Falun Dafa) is an ancient form of qigong, the practice of refining the body and mind through special exercises and mediation and seeking to cultivate in the human character the traits of Truthfulness, Compassion, Forbearance; and

WHEREAS, Falun Dafa distinguishes itself from other qigong practices by emphasizing not only physical cultivation, but also cultivation of one's moral character in daily life according to higher precipices; and

WHEREAS, Falun Dafa's effectiveness in improving health and its profound principles have quickly made the practice immensely popular throughout the entire world. Since being introduced to the general public in 1992, Falun Dafa has attracted tens of millions of people in over 40 countries. Most major cities and universities in the United States, Canada, Australia, and Europe have English-speaking Falun Dafa practice groups; and

WHEREAS, the people who practice Falun Dafa come from every imaginable walk of life as Falun Dafa transcends cultural, social, economic, and national boundaries. The practice has spread largely by word of mouth, as those who learn it usually find the benefits simply too good to keep to themselves.

NOW, THEREFORE, I, Rodney Romano, by virtue of the power vested in me as Mayor of the City of Lake Worth, do hereby proclaim May 13th through May 19th, 2002 as

And I encourage the citizens and residents of Lake Worth to investigate this and all ways to develop their bodies, minds and spirits.

In WITNESS whereof, I have set my hand and caused the seal of the City of Lake Worth, Florida, to be affixed hereto 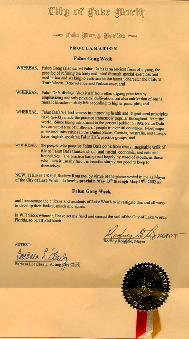