Proclamation of May 13, 2002 as Falun Dafa Day by Mayor of the City of Franklin, Tennessee

WHEREAS, Falun Dafa (also known as Falun Gong) is an ancient and traditional Chinese self-cultivation practice for improving the mind and body through gentle exercise and Qi-Gong meditation, having a significant effect on stress relief and overall mental and physical health, and

, it is a virtuous system of body-mind-spirit emphasizing the principle of Zhen-Shan-Ren (Truthfulness-Compassion-Forbearance), which has helped numerous people turn away from their bad habits and improve their moral standards, and

, such a peaceful and nonviolent movement has been banned by Chinese Communist Government as an unnecessary fear of the growing number of practitioners, and thousands of Falun Gong practitioners in China have been put in jails and labor camps without trials, and

, the great compassion and forbearance demonstrated by Falun Dafa practitioners under the most severe environment has touched the heart of every kind-hearted human being, and

, May 13, 2002 is the tenth anniversary day since Falun Dafa was made public and is also the World Falun Dafa Day.

NOW, THEREFORE, I. Jerry W. Sharber. Mayor of the City of Franklin, Tennessee, do hereby proclaim May 13, 2002 as

in the City of Franklin and urge all citizens to join the celebration.

IN WITNESS WHEREOF, I hereunto have set my hand and caused the Seal of the City of Franklin to be affixed this third day of May 2002. 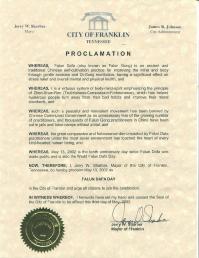 “Proclamation of May 13, 2002 as Falun Dafa Day by Mayor of the City of Murfreesboro, Tennessee”