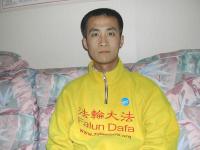 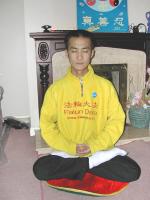 In 2001, during the period when Premier Zhu Rongji visited Ireland, Falun Gong practitioner Zhao Ming was the media focus in Ireland. At that time, all kinds of media reported on the human rights issue in China at length. Most of the reports focused on the persecution of Zhao Ming and Falun Gong in China. During that period of time, the Irish Premier, the Irish President and the President of Trinity College in Dublin all brought forward the Zhao Ming issue to the Chinese Premier, which marked a milestone in the campaign that overseas people with a sense of justice from all walks of life participated in to rescue Zhao Ming.

Under pressure from the strong voice of justice worldwide, Zhao Ming was released on March 12 after nearly two years of detention in a forced labor camp. He returned to Ireland on March 23. Now, Zhao Ming has become the media focus in Ireland again. On March 25, the "Friends of Zhao Ming," Graduate Student Association and the Student Association of Trinity College held a press conference to celebrate Zhao Ming's return. Many reporters and photographers from various media outlets came to interview Zhao Ming. The next day, at least 5 newspapers reported Zhao Ming's story with his photos. In addition, Zhao Ming also accepted a live telephone interview from Irish national radio station RTE. The television station TV3 invited Zhao Ming to its studio for a live interview. Irish national TV station TRE also sent reporters to our practice site, Merion Square, over the weekend to do a feature story. They asked Zhao Ming to talk about his experiences in the forced labor camp and the persecution he had endured. They also asked Falun Gong practitioners from Ireland to demonstrate the exercises and asked some practitioners to share their experiences in cultivation. A camera crew filmed and produced the special program introducing Falun Dafa and broadcasted it on TV.

Through his great personal endurance and sacrifice, Zhao Ming has not only established his own mighty virtue, but also has helped pave the way for a wonderful future for the Irish people.

“Validate the Fa in a Believable Way”