Whereas, it is fitting that Members of State Assembly who comprise the "Peoples House" of the Empire State, recognize and acknowledge the good work of those who have significantly impacted the lives of New Yorkers as well as practices that contribute so much to the cause of peace and harmony in the world; and

Whereas, since its introduction to the public by Li Hongzhi in 1992, Falun Dafa (also known Falun Gong), a practice of Chinese self-cultivation designed to improve both physical and spiritual health, has spread rapidly around the world, and now has more than 100 million practitioners in more than 40 countries; and,

Whereas, a photo exhibit, entitled "The Journey of Falun Dafa" is opening today, April 15, 2002, in the north lobby of the Concourse at the Empire State Plaza here in Albany, New York, the Capital city of the Empire State; and,

Whereas, this exhibit includes some 50 photos examining the beginnings of Falun Dafa, its growing popularity, and the repression of the practice by the Chinese government; and,

Whereas, the photos have been shown in many countries and regions including such venues as Canada, England, Germany, Japan, Russia, Ukraine, Hong Kong, Taiwan as well as here in the United States; and

, its practitioners firmly advocate the benefits of Falun Dafa as numerous and varied, ranging form improved health and newfound energy to mental clarity, stress relief and peace of mind, they also pursue the goal of wisdom and enlightenment; now therefore be it

Resolved, that as a duty elected member of the Assembly of the State of New York, on behalf of the Speaker and the entire Assembly, I send greetings and pay tribute to

The Practitioners of Falun Dafa

for promoting Truth, Compassion and Forbearance among the human family and for sharing their efforts here in the Capital Area of the great state of New York.

In witness whereof I have hereunto set my signature this fifteenth day of April,2002. 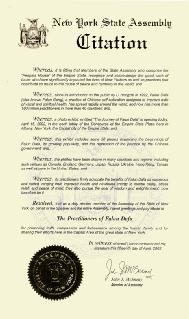 “Give All We Have to Eliminate the Evil”