The news from Xinhua net in Changchun on April 7 said that Jilin Province, which had just been washed by a spring rain, was suddenly covered by a thick layer of sand and dust. The strongest sand and dust storm of the year occurred on this day, sweeping through almost all of Jilin Province during the morning. In Changchun City the day was dark and the visibility poor. All airplane flights at Changchun airport were delayed. 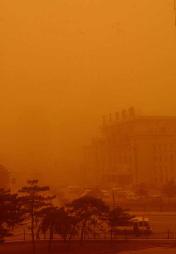 On April 7 in Harbin "sand and dust snow" fell. The day was dark and the visibility low. Everyone and everything was speckled with sand, dust, and mud, which are expected to continue to affect Northern China.

From April 6 to 8, Inner Mongolia was beset by a sudden strong storm of sand and dust, the second major dust storm since spring began. In some places visibility was less than 100 meters. The strength of the wind was up to 8 or 9 grade [on a 12 grade system] in the affected area. The wind had gusts of up to 30 meters per second, while the temperature generally dropped 8 to 10 degrees Celsius.

A recent survey in Kangning Hospital in Shenzhen showed that over 180,000 adults suffer from psychiatric diseases to different degrees. More than 9000 children have mood and behavior disorders. However, less than 30,000 people have received professional treatment, causing some social problems.

On April 7 in Shi Jiazhuang, a bomb shelter that was left from the 70's and was supposed to be converted into a restaurant collapsed. Four workers who were decorating the building were buried alive. The emergency rescue teams pulled the workers out of the rubble and sent them to hospitals, but later, it was verified that all had died.