WHEREAS, Falun Gong (also known as Falun Dafa) is an advanced cultivation and practice system of mind, body and spirit rooted in the ancient oriental culture that has helped people worldwide improve their health, purify their mind, uplift their spirit and deepen their understanding of life and humanity, leading people to a more meaningful life; and

WHEREAS Falun Gong was introduced to the public By Li Hongzhi in 1992 and has transcended cultural and national barriers, and over the last nine years over 100 million people in over 40 countries have come to practice Falun Dafa; and

WHEREAS Falun Dafa bears the principles of Truthfulness, Compassion and Forbearance (Zhen, Shan, Ren) and practitioners strive to live by these principles under every circumstance which in turn benefits the community and the society as a whole: and

WHEREAS, the practice of Falun Dafa is simple yet profound and effective and consists primarily of two components: self-improvement through Mr. Li's teachings, performing five gentle, exercises which, including a meditation, are easy to learn, enjoyable, relaxing and energizing; and

WHEREAS, Falun Dafa was first introduced in Wisconsin in 1998 and practices and free seminars are performed on the University of Wisconsin-Madison campus and many other locations in the City; and

WHEREAS, in the last two years, a systematic escalation of horrific attacks has been launched by Jiang Zemin's regime against Falun Gong practitioners in China; and

WHEREAS, this policy violates China's own constitution, as well as the International Covenant on Civil and Political Rights and the Universal Declaration of Human Rights; and

WHEREAS Jiang Zemin's regime has allegedly created notorious government "610" offices throughout China with the special task of overseeing the persecution of Falun Gong members through organized brain-washing, torture and murder; and

WHEREAS, propaganda from China's state-controlled media has inundated the public in an attempt to breed hatred and discrimination; and

WHEREAS, the number of known deaths from the alleged torture has reached 387 and thousands more have allegedly been tortured while confined in labor camps, prisons and mental hospitals and have been forced to attend brainwashing classes; and

WHEREAS, women, in particular, have allegedly been the target of numerous forms of sexual violence, including rape, sexual assault and forced abortion; and

WHEREAS, Jiang Zemin 's regime allegedly ordered to "kill without mercy" Falun Gong practitioners following a television broadcast of the truth of Falun Gong in Changchun City, China: and

WHEREAS, the alleged campaign of persecution has been generated by the Chinese government, carried out by government officials and state police and permeated every village and every level of government in China;

NOW THEREFORE BE IT RESOLVED that the Mayor and Common Council of the City of Madison do hereby call upon the government of the People's Republic of China to cease its persecution of Falun Gong practitioners immediately, to dismiss notorious government "610" offices throughout China and to release all Falun Gong practitioners from detention immediately;

BE IT FURTHER RESOLVED that the Mayor and Common Council hereby proclaim and recognize May 13, 2002 AS

Signed and sealed this 10th day 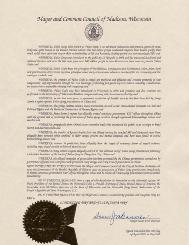 “Why is Jiang Afraid of Seeing Chinese People?”