(Clearwisdom.net) According to a March 20, 2002 report on Sina.net, the fiercest sand storm of the year hit Gansu Province on March 19. 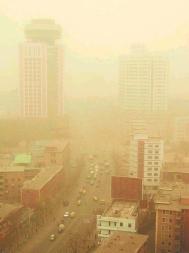 According to the experts at Lanzhou City Central Observatory, from 8:00 a.m. to 5:00 p.m. on March 19, sand storms hit several cities in Gansu Province, including Baiying City and Lanzhou City. Some areas had sand storms and extremely low visibility, while the Weather Department has been predicting snow for the western areas of Gangsu Province since 2:00 p.m. on March 19.

While the reporters were conducting interviews in downtown Lanzhou City, at around 2:40 p.m., the sun disappeared and they could smell the sand. By 4:00 p.m., sand was floating in the sky, and buildings were covered with the yellow sand. Many people put facemasks on, and some even covered their heads with plastic bags to avoid the sand. At about 5:00 p.m., the visibility began to decrease, and vehicles on the city bypass highway had to turn their headlights on.