Germany Points Out at UN: China Must End Persecution of Members of the Falun Gong Spiritual Movement

"Despite the release of political prisoners and the increased readiness to cooperate with international human rights mechanisms, we still take a very critical view of the human rights situation in China," said German Foreign Minister Joschka Fischer.

China must end its persecution of Christians and members of the Falun Gong spiritual movement, Fischer told the 53-nation U.N. Human Rights Commission.

About 700 European and Asian adherents of Falun Gong gathered outside the U.N.'s European headquarters Wednesday to urge that the commission condemn China's treatment of their movement.

Alexis Genin, a French spokesman for the movement, said the demonstration was "to appeal for the tens of millions of Chinese who have lost all their human rights in China."

In particular, Genin deplored "the repression of hundreds of thousands of Chinese people" who follow Falun Gong. "Repression has only intensified for three years." 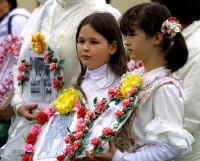 Young girls, members of the organization Falun Gong, demonstrate with pictures of people they say are missing in China in front of the United Nations building in Geneva, Switzerland on Wednesday, March 20, 2002 during the 58th session of the Commission on Human Rights. (AP Photo/ Donald Stampfli)