The opening ceremony for "Falun Dafa Week Celebrating Truthfulness-Compassion-Forbearance" in Cairns took place at a lovely venue in the Cairns library. Cairns is a favourite tourist destination in northern Queensland, Australia for people from all over the world coming to see the Great Barrier Reef and the Atherton Tablelands. Many locals, tourists and students visit the library, which made it an ideal venue for this important event.

The library staff was most friendly and accommodating, giving us the keys to allow early access for setting up. We began arranging the tables, the "Journey of Falun Dafa" photo exhibit and other displays around 7:00 a.m. to be ready by 9:30 a.m. Also, a display table was set up in the library itself for the coming week. At this time, righteous thoughts were sent to clear away any interference. Afterwards, a few practitioners positioned themselves outside the library to hand out invitations to everyone entering the library. The outcome from this was very good as many tourists, foreign students (Japanese and Korean) and locals dropped in to see the photo exhibit and learn more about Falun Dafa.

Shortly after 10:30 am, our Guest of Honour, Mrs. Desley Boyle MP, arrived to declare the opening of Falun Dafa Week in Cairns. Mrs. Boyle gave a welcoming speech to all present and declared her warm-hearted support of Falun Dafa and the principles of Truthfulness, Compassion and Forbearance. She remained to watch the exercise demonstration and then went around the room to carefully look at the photo exhibit and other displays. As a gesture of her support, Mrs Boyle signed a Proclamation on her letterhead and presented this to the practitioners. After the ceremony, refreshments were provided which proved to be a drawing card for people who then proceeded further to see our display. 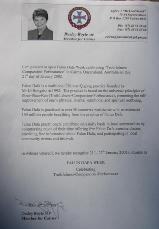 There was a steady flow of people through the exhibits due to the selfless actions of the practitioners who were standing out in the hot sun inviting people into the library to learn about Falun Dafa. Many people watched a special video presentation of the exercises and several of them even stayed to learn the exercises. Cairns has an active practice site and a presence at the local markets on weekends, so interested people were directed to contact the local practitioner running these events.

The official opening of Falun Dafa Week in Cairns was very successful and afforded practitioners the chance to Hongfa and clarify the truth to many people who had the predestined good fortune to learn about Falun Dafa. Although most of them may not become practitioners at this time, they have been given the opportunity to position themselves favourably with respect to the Fa and learn about the severe persecution of Truthfulness, Compassion and Forbearance by the Jiang regime in China.