Whereas, During the weekend of November 30, 2002, the followers of Falun Dafa, also commonly known as Falun Gong, will be holding the first large-scale Falun Dafa experience-sharing conference in Pennsylvania; and

Whereas, The two-day event is expected to draw several thousand people from across the United States, as well as Canada, South America, Europe, and eastern Asia. The discussion will center on the triumph of the human spirit through study of and assimilation to the universal characteristics of Truthfulness-Compassion-Forbearance. Participants will talk about dramatic changes in their physical, mental and spiritual well-being that they have experienced since they began the practice of Falun Dafa; and

Whereas, Falun Dafa originated in China, and since 1999 has been peacefully resisted the persecution by the Chinese Communist Party. It is a traditional self-improvement practice of special exercises and meditation that has brought health and well-being to countless individuals. Practiced freely in more than fifty countries by tens of millions of people, it transcends cultural, social, economic and national boundaries.

Now therefore, the Senate of the Commonwealth of Pennsylvania proudly recognizes the practice of Falun Dafa upon this joyous and momentous occasion; affirmatively states that its practice has promoted inner peace and well-being, as well as the pursuit of self-enrichment, for the millions of individuals who practiced it;

And directs that a copy of this document, sponsored by Senator Anthony Hardy Williams, be transmitted to the Falun Dafa Committee.

Seal of the Senate of Pennsylvania 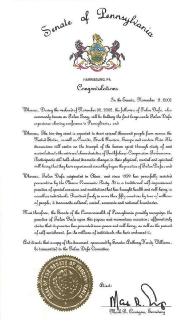 “The Labor Minister of Finland: "The Reports of Systematic Torture, Rape, Murder and Humiliation of Female Falun Gong Practitioners Are Shocking to Read."”