(Clearwisdom.net) According to a report from Apple Daily on December 5, 2002, Hong Kong SAR government officials insist that Article 23 of the "Basic Law" completely coincides with the "Johannesburg Principles" on national security, freedom of expression and access to information. However, Ms. D'Souza, the Executive Director of the law consultant group in charge of creating these principles personally came to Hong Kong yesterday to expose the Hong Kong government's deceptions. Ms. D'Souza pointed out that Article 23 violates the "Johannesburg Principles." She further warned the Hong Kong people not to believe that the law would only be saved for future possible use, as according to historical experience, these laws will be used someday!

Ms. D'Souza stated that even if Article 23 were only being passed for future possible use, it would immediately create a "threatening" effect, while the legislation itself would only indicate the beginning of an even larger problem. 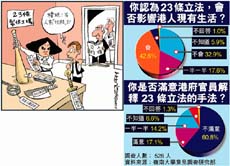 A public opinion investigative department at Lingnan University successfully interviewed 528 citizens. Sixty percent of those interviewed were not content with the tactics that the Hong Kong government officials have used to promote Article 23. Forty percent believed that Hong Kong citizen's current lifestyles will be changed if the legislation is enacted. Fifty percent claimed that it would undermine their confidence in the "one country, two systems" policy. Fifty seven percent of the people thought that now is not a good time to enact the legislation, while fifty one percent directly pointed out that the legislation is not necessary, because it will "affect citizen's freedom and rights" as well as "their satisfactory current situation."

The New Journalist, a publication started 32 years ago for training journalism students at Jinhui University also raised concerns over Article 23. An editorial in a recent edition asked: If a newspaper were to condemn the SAR Chief Executive Tung Chee-Hwa's mistakes, and some people then did things that endangered state security or caused violent rebellion, would this newspaper still be able to get away from the charge of Article 23? "We cannot help but worry that freedom of speech will be undermined."

Definition of "instigating publications" is vague

The editorial pointed out that the articles in the consultation are fairly vague, and the definition of "instigating publications" especially worries people. "We should have the freedom to express our opinions, including some topics sensitive to the central government and the Hong Kong government."

As for the way that Security Secretary Regina Ip has forcefully promoted Article 23, the editorial also questioned her multiple assurances. "Even though she continuously emphasized that a crime is considered only when the report or opinion is able to instigate others to use force to commit crimes, Ms. Ip is not the only person who determines whether it is a crime. ... We have no way to evaluate how 'others' will react after they read the reports."

The "Johannesburg Principles" were drafted in 1995 by a group of experts in international law, national security and human rights. The Principles are based on international and regional law and standards relating to the protection of human rights. They mostly deal with how to protect individual freedom and the freedoms of expression and information exchange under the precondition of protecting state security. Security Secretary Regina Ip has expressed many times that the proposed legislation of Article 23 tallies with the standards set by the "Johannesburg Principles," but she declined to entirely introduce those Principles. Ms. D'Souza, one of the creators of the Principles, was invited by the Hong Kong Journalist Association to come to Hong Kong to attend events related Article 23. She resolutely stated that the Hong Kong SAR government's attitude towards the Principles is incorrect: "You (SAR government) cannot apply the "Johannesburg Principles" with high selectivity."

Citizens will unknowingly violate the law

Ms. D'Souza said that after she read the consultation document, she found that it severely violated the standard of the "Johannesburg Principles." Furthermore, it violated a number of international standards of protecting human rights and the freedom of expression in the present world. She said, "Article 23 undoubtedly jeopardizes individual freedom, and the freedoms of speech and information exchange." For instance, the definition of "hidden treason" could make citizens unknowingly commit crimes for no reason. Ms. D'Souza did not understand why the SAR government would select this period of time to create this legislation, but even if the legislation is indeed to be enacted, a white-page draft consultation document should be issued and the proposal should be extensively modified according to the "Johannesburg Principles."