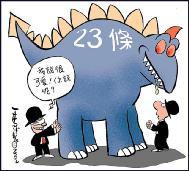 (Clearwisdom.net) The Apple Daily reported on December 4, 2002, the Hong Kong Association of Banks (HKAB) would have a regular meeting tomorrow. Rather unusually, the topic of the discussion was to be the proposed enactment of Article 23 of the Basic Law, instead of their usual topic of discussion, the economy. Chairman of the Hong Kong and Shanghai Banking Corporation Ltd expressed that the bank would not declare its position on a political topic, but if the HKAB inquired about its opinions, he would make a reply.

It is said that besides concerns of obstructing the free flow of information after the enactment of Article 23, what worries bankers most is that their future relationship with Taiwan customers would be affected. The least influence might be to lose Hong Kong's role as a bridge for Taiwan investment to enter the Mainland, the worst is that the bankers may become accused of being criminals attempting to split up the country.

It is reported that the Hong Kong General Chamber of Commerce also received opinions from its members, worrying that the legislation of Article 23 would affect their cooperation with Taiwan counterparts. A high-ranking official of the General Chamber of Commerce said, "What concerns those in business circles is a practical matter. If we cooperate with the Taiwanese to do business in the future and we don't know their political background, if they happen to support Taiwan's independence, we will be likely be in violation of the new law. The government has not been able to dispel our doubts about this at all. "

Li Guobao said the day before yesterday, some overseas bankers expressed concerns over if the legislation of Article 23 will affect free information flow. It shows that the overseas bankers worry that the law will affect their business operation. The HKAB would discuss this matter at tomorrow's regular meeting.

As for the overseas bankers' concerns over obstructing free flow of information, some people in the banking system pointed out that banks' customers are from all walks of life, including state-run enterprises or companies running businesses in Mainland China. As a result, banks routinely have access to information involving the Mainland's economy and politics. As it is difficult for the banks to track the source of all such material, they would likely end up in violation of the item in Article 23 about stealing the country's secrets, and be sentenced to as long as 14 years in jail.

The Hong Kong Association of Banks is composed of licensed banks on the island. It is the highest executive body, and comprises three note-issuing banks, four Chinese banks and five overseas banks. Chairmanship of the HKAB alternates among representatives of the three note-issuing banks. Chairman of this year is Liu Jinbao, president of the Bank of China (Hong Kong) Ltd.

It is reported that overseas banks have had the strongest reaction toward Article 23. Chinese banks remain low key.

[Note: the Chinese names above are all translated according to the way they are spelled in Mainland China, which is slightly different from what is used in Hong Kong]