Early in the morning, it was drizzling and chilly. Five thousand practitioners from around the world, along with people from various circles in Taiwan, gathered in the stadium to attend this grand conference. The hosting organization, the Taiwan Falun Dafa Association, invited various people in Taiwan to attend.

Vice Interior Minister Hsu, Ying-shen, the Mayor of Taipei, Ma Ying-Jeou, and the President of Taiwan National University, Chen Wei-Jao, all came in person to give speeches to show their respect and support for Falun Gong practitioners. Later, the vice president of Taiwan, Lu Hsiu-lien, sent her congratulations and best regards to Falun Gong practitioners. 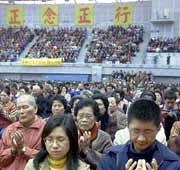 A huge banner with Teacher's poem "Righteous Thoughts and Righteous Actions" written on it was hung in the stadium. The golden words on the banner lit up the entire stadium:

On behalf of the Ministry of the Interior, Vice Interior Minister Hsu Ying-shen sent their highest respect and best wishes to Falun Gong practitioners for their adhering to the principles of "Truthfulness-Benevolence-Forbearance" and for their righteous thoughts and righteous actions. Mr. Hsu pointed out that Falun Gong's popularity in Taiwan is one of the achievements of democracy in Taiwan.

Mr. Ma Ying-Jeou, who just won a victory in Taipei's mayoral election, said that every morning he can see people practicing Falun Gong in the park. He continued, "Truthfulness-Benevolence-Forbearance has made millions of people healthy and has improved their morality."

Mayor Ma said he has always paid close attention to the issues of freedom and human rights. The "local government human rights white paper" he brought up during the election is in fact a summary of his administration's policies. With regard to the persecution of Falun Gong practitioners by the Chinese leader, he said that Taiwan is a place where human rights are respected and assembly is allowed. It is the Chinese people's tradition to respect others who hold different opinions, which is also why Chinese culture is so great. If China wants to preserve traditional Chinese culture, they should learn to become tolerant.

Mayor Ma also said that he didn't feel anything inappropriate about attending a Falun Gong conference. He also attends the June 4th Commemoration Ceremony every year. He thinks that human rights go beyond national borders, and they also surpass the straits that separate Mainland China and Taiwan.

The Fa conference was successfully held. The Taiwan Falun Dafa Association would like to express its thanks for the support received from all circles. Practitioners who spoke at the conference included housewives, a presiding judge of the court, college students, a Swede who is learning Chinese in Taiwan, economists, and a mainland practitioner who walked out of labor camps with righteous thoughts. People who practice Falun Gong come from different walks of life, truly reflecting the fact that Falun Gong is flourishing all over the world.

“The Truth About the Death of My Wife, Chen Ouxiang, at the Baimalong Labor Camp, Zhuzhou City, Hunan Province”