UK: Stories from in Front of the Chinese Embassy (photo)

Our 24-hour appeal in front of the Chinese Embassy in London has lasted for more than 200 days, during which a lot of touching things have happened. We came to realise the importance of spreading Dafa and revealing the truth in front of the Embassy; at the same time, I sensed a gradual change in people's hearts. 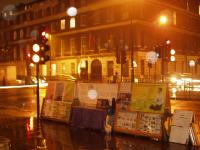 One day before Christmas, the policeman on duty in front of the Embassy came to talk with me for more than an hour. He said, "I've seen the material on the posters and I support you. However, you come to sit here every day from summer to winter. Are you trying to impose pressure on the Chinese authorities?" I replied, "We insist on sitting here to allow more people to understand us. Falun Gong practitioners are good people and they are not supposed to be persecuted. Everyone in the world has good thoughts and we believe that when people-- such as officials in the Embassy or those in China -- get to know Falun Gong, their good side will guide them to correct those errors in the past. He nodded his head after hearing what I said and replied, "I've never heard people talk in such a way. What you said makes me think that you are a group of good people who are even friendly towards your antagonists." He asked me again, "What's in your mind when you sit here?" I replied, "I think of nothing when I practice the exercises and keep myself in a state of emptiness. However, when I sit in front of the Embassy, I hope to stop the cruel killing and stop the persecution just like what is said on the posters." He signed the petition after hearing this and said, "What a wonderful thing, to calm down and think of others. This Christmas, I will also arrange some time to sit down and think of others." I was moved after hearing what he said.

One weekend, a middle-aged man came to the Embassy in the rain and sat with us for more than three hours. He told us that he passed by every day on his way to work but had no time to stop. He read our leaflets and decided to come especially to sit with us for the weekend. Even though it was raining when he came, he still brought a lot of food and two bottles of hot water. He said that he had tried some Qigong [traditional exercise methods intended to improve health and promote fitness in China] practices, but felt that Falun Gong was good. So I taught him the Falun Gong exercises and before he left, I told him to bring his son and daughter to learn next time.

One day a man with a camera approached us and introduced himself as a reporter from a magazine. He said that they were planning a special report entitled "Sit still with a peaceful mind for your rights" in a column about issues in society. This is a famous magazine in the UK with a large circulation and influence in society. They'd looked for some photos of people sitting still with a peaceful mind. He happened to drive by us that day. When he saw our banners, he turned his car around immediately and stopped to interview us. He also took photos of us for almost an hour.

There's another story about an Indian brother and sister. On one Saturday, many practitioners were sending forth righteous thoughts when the brother and sister walked by and were attracted by our posters. Early the next morning, they came to express their admiration and brought a big bottle of mineral water, milk, bread and a lot of fruit. They also happily learned the five sets of Falun Gong exercises that day.

About half a year ago when we started our 24-hour petition in front of the Embassy, an elderly man in the neighbourhood complained that we were disturbing his peaceful life. Whenever we tried to explain, he refused to listen. As we continued though, his attitude toward us improved. One day when I saw him, I smiled and said hello to him. He smiled and said to me, "God has stopped the rain for you." Another day he saw me and said, "Girl, you came late today. The prince passed through this street and if you had been here, he'd have seen your beautiful demonstration of the exercises." I gave him a Christmas card before Christmas and he was very happy. We have now become very good friends.

There's another story about a Chinese boy, A-Guo. He came from China and was working part-time in a restaurant in Chinatown. The chef in the restaurant is a man with a strong sense of justice. He shows whoever comes to his restaurant the Falun Dafa VCD and tells them the truth. It is in his house that A-Guo learned the truth about Falun Gong. He saw the VCD more than ten times and then called us to say that he'd like to learn the exercises. However the call would not connect. Still, he went to the park and passed by the Embassy one day and was very happy to learn the exercises from us. Another day not long afterwards, he bought a lot of food from McDonalds for us and said that we had been working too hard. On another occasion, it was raining yet I found he was waiting for me after I finished the sitting mediation. He was very wet because of the rain and bought us some fried noodles. I thanked him and tried to give him some money, but he insisted on not taking my money and turned to run away. Yesterday I saw him again waiting for me after I finished the sitting mediation. He said that he feels that he can talk to us as if we are his family.