, Falun Dafa, also known as Falun Gong, is a traditional Chinese Qigong exercise and meditation practice which aims to improved the mind and body of the practitioner through conscious self-improvement, upgrading of the moral character, gentle movement, and meditation; and

, through five gentle exercises, practitioners of Falun Dafa cultivate their minds, bodies, and sprits by following the principles of Truth, Compassion, and Tolerance; and

, in addition to having profound stress-reduction effects and improving mental and physical health, Falun Dafa has the higher goal of bringing people to wisdom and enlightenment; and

, since its introduction to the public in 1992 by Mr. Li Hongzhi, the practice has benefited more than 100 million people in more than sixty nations worldwide; all classes are taught free of charge, including the classes offered in Gainesville; and

, greater awareness of the benefits of Falun Dafa can strengthen this community and aid the individuals that comprise it.

, I, Thomas D. Bussing, by the authority vested in me as Mayor of the City of Gainesville, do hereby proclaim December, 2002 as

in the City of Gainesville and invite all our citizens to join me honoring Falun Gong's efforts to improve society through offering free cultivation classes in the Gainesviled area.

, I have hereunto set my hand and caused to be affixed the official seal of the City of Gainesville, Florida, this 12th day of December, A.D.,2002. 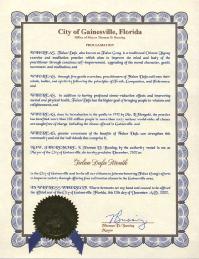