Media Summary: People from All Walks of life in Hong Kong Oppose Legislation on Article 23 (Photos) 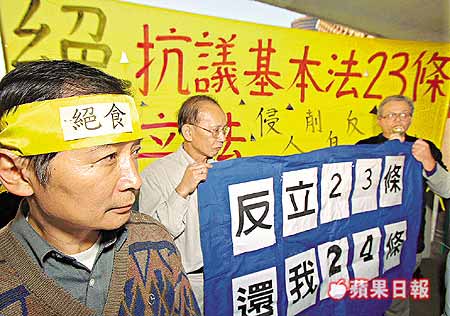 Five people started a hunger strike on the street and hoped to get more people to join the campaign of opposing legislation on article 23.

Apply Daily reported on December 13 that the Hong Kong Journalist Association called on members to ask friends to participate in the demonstration against legislation on article 23 held in Victoria Park on Sunday and said it was time to step forward. The International Education Association also called on teachers to respond. Eight college instructors met with Security Secretary Regina Ip Lau Suk-yee, and they collected more than 500 signatures from college instructors to oppose the legislation. Many organizations also asked their members to participate in the campaign. Five local residents started a 48-hour hunger strike in the cold starting yesterday's evening in order to protest the Hong Kong authorities' attempt to trample on human rights with new legislation.

The Hong Kong government's proposal of legislation on Article 23 caused worry in the business community. The latest issue of Far Eastern Economic Review published an article saying that the proposal erodes Hong Kong's laws and undermines the guarantee of "One country two systems." The article further pointed out that business community should reevaluate the risks of doing business in Hong Kong.

World Journal reported on December 14 that the Hong Kong Canada Alliance and Toronto Association for Democracy in China held a press conference in Metro Hall, Toronto to express their opposition to legislation on article 23 and called on people of from all walks of life to support the weekend "rally to rescue Hong Kong".

Ming Pao: Over Half of Residents Surveyed Oppose Legislation on Article 23

Ming Pao reports on December 14 that a public opinion survey found over half of those polled worry about personal freedom and oppose legislation on Article 23. Scholars suggest that Hong Kong government must recognize this political crisis and present the White Bill to residents for consultation.

The survey also found that approval ratings for both Secretary for Security Regina Ip Lau Suk-yee, who is in charge of legislation on Article 23, and Secretary of Justice Elsie Leung fell significantly from August to November.

The survey also found that 63% of Christians oppose the claim "Now it is the right time for legislation on Article 23", higher than the 52% of those surveyed not claiming a religious affiliation.