NASA: Exotic Innards of a Neutron Star Revealed in a Series of Explosions (Photos)

[Note: Modern scientific discoveries, especially astrophysical observations, have tremendously opened up man's visual field. Some substances such as neutron stars and black holes are far beyond people's daily life experiences and their existence was only a matter of speculation a few decades ago. Now they have been verified through scientific observations and experiments. Once again, science has proved the existence of something that people have once denied or even opposed because it was not visible or not recognized by the current science and technology.]

Amid the fury of 28 thermonuclear blasts on a neutron star's surface, scientists using the European Space Agency's (ESA) XMM-Newton X-ray satellite have obtained a key measurement revealing the nature of matter inside these enigmatic objects. 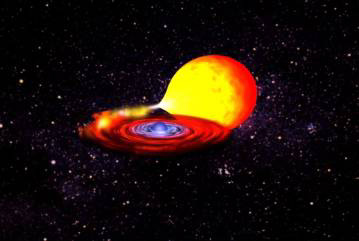 The result, capturing for the first time the ratio between such an ultra-dense star's mass and radius in an extreme gravity environment, is featured in the November 7 issue of Nature. Dr. Jean Cottam of NASA's Goddard Space Flight Center in Greenbelt, Md., leads this international effort. 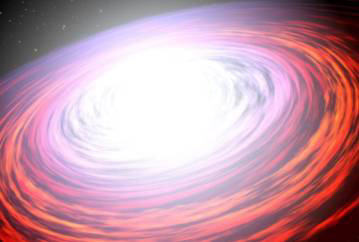 The neutron star -- the core remains of a star once bigger than the Sun yet now small enough to fit within the Washington Beltway -- contains densely packed matter under forces that perhaps existed at the moment of the Big Bang but which cannot be duplicated on Earth. The contents offer a crucial test for theories describing the fundamental nature of matter and energy.

Cottam and her team probed the neutron star's interior by measuring for the first time how light passing through the star's half-inch atmosphere is warped by extreme gravity, a phenomenon called the gravitational redshift. The extent of the gravitational redshift, as predicted by Einstein, depends directly on the neutron star's mass and radius. The mass-to-radius ratio, in turn, determines the density and nature of the star's internal matter, called the equation of state.

"It is only during these bursts that the region is suddenly flooded with light and we were able to detect within that light the imprint, or signature, of material under extreme gravitational forces," said Cottam.

The neutron star is part of a binary star system named EXO 0748-676, located in the constellation Volans, or Flying Fish, about 30,000 light-years away in the Milky Way galaxy, visible in southern skies with a large backyard telescope.

Scientists estimate that neutron stars contain the mass of about 1.4 Suns compacted into about a 10-mile-wide sphere (16 kilometers). At such density, all the space is squeezed out of the atoms inside the neutron star, and protons and electrons squeeze into neutrons, leaving a neutron superfluid, a liquid that flows without friction.

By understanding the precise ratio of mass to radius, and thus pressure to density, scientists can determine the nature of this superfluid and speculate on the presence of exotic matter and forces within -- the type of phenomena that particle physicists search for in earthbound particle accelerators.

Today's announcement states that EXO 0748-676's mass-to-radius ratio is 0.152 solar masses per kilometer, based on a gravitational redshift measurement of 0.35. This provides the first observational evidence that neutron stars are indeed made of tightly packed neutrons, as predicted by theory estimating mass-radius, density-pressure ratios.

"Unlike the Sun, with an interior well understood, neutron stars have been like a black box," said co-author Dr. Frits Paerels of Columbia University in New York. "We have bored our first small hole into a neutron star. Now theorists will have a go at the little sample we have offered them," he said.

More important, said co-author Dr. Mariano Mendez of SRON, the National Institute for Space Research in the Netherlands, "We have now established a means to probe the bizarre interior of a 10-mile-wide chunk of neutrons thousands of light-years away -- based on gravitational redshift. With the fantastic light-collecting potential of XMM-Newton, we can measure the mass-to-radius ratios of other neutron stars, perhaps uncovering a quark star."

In a quark star, which is denser than a neutron star and has a different mass-to-radius ratio, neutrons are squeezed so tightly they liberate the subatomic quark particles and gluons that are the building blocks of atomic matter.

To obtain its measurement, the team needed the fantastic radiance provided by thermonuclear bursts, which illuminate matter very close to the neutron star surface where gravity is strongest. The team spotted the 28 bursts during a series of XMM-Newton observations of the neutron star totaling 93 hours. There are dozens of known binary systems with neutron stars, like EXO 0748-676, where such bursting is seen several times a day, the result of gas pouring onto the neutron star from its companion star.