(Clearwisdom.net) Falun Gong practitioners in Germany are appealing to the German government, international human rights agencies and the kind German people on behalf of German resident Zhang Zhendan's wife Mrs. Wang Xiaoyan. Mrs. Wang is a Falun Gong practitioner in Dalian City, Liaoning Province. In early 2000, she went to Beijing to appeal for Falun Gong. Because of that she was initially detained in Beijing Office of the Dalian Police Department and then transferred to the Dalian Detoxification Center to undergo brainwashing. After being fined 3500 Yuan RMB, she was detained in the Dalian Yaojia Detention Center for 15 days. (The average monthly income for an urban worker in China is 500 Yuan.) 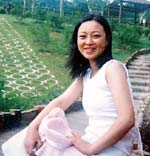 Xiaoyan was arrested again at the end of year 2000 for passing out Falun Gong literature. She was first detained in Yaojia Detention Center and then sent to Masanjia Forced Labor Camp for forced brainwashing during the 2001 Spring Festival. She was released on bail due to medical reasons in October 2001. She was closely watched and harassed by the Dalian Zhongshan District management and the police. Her passport was confiscated, and she has been forced to leave home and go from place to place to avoid further persecution.

“Germany: Parade and Other Activities in Goslar (Photos)”