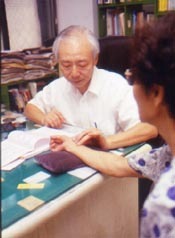 Dr. Hu said that from the viewpoint of Chinese medicine, being careful about what one eats and taking medicinal and food supplements can improve the performance of the body's immune system. In the recent years, many traditional Chinese medical doctors and Chinese herbal medicine drugstores put up big posters advertising Chinese herbal supplements as winter approaches. This is said to boost the immune system and make the person less likely to get sick in the next year.

But the results of the above mentioned method is quite limited. As Dr. Hu pointed out, "If a person is stressed or worried, one's immunization system will have problem. If a person can keep a peaceful but warm heart, one's immune system performance will improve. This is also confirmed in western medical system."

Dr. Hu also said that he kept smiling almost all the time. But to keep a smile not rooted in the heart is very difficult. He joked about himself that before practicing Falun Dafa was like "The skin smiles, but the muscle doesn't. The muscle smiles, but the heart doesn't." After practicing Falun Dafa and following the principles of the teaching, he began to give up the desires and attachments of normal people. He found out that the more he had given up, the easier it became to give up more. In the end, after he gave up the desires and attachments, he found he didn't lose anything at all.

Besides giving up desires and attachments, Dr. Hu said he practiced the Falun Gong exercises to improve metabolism and circulation. In the end, he said that he had not used his medical care card even once after Taiwan started it's socialized medical care system. Falun Gong is his secret to keeping healthy.

“Karmic Retribution: The Sudden Death of a Ruffian Hired to Beat Dafa Practitioners”

“Amnesty International Raises Concern about Ms. Yoko Kaneko and Calls for her Immediate and Unconditional Release”