Falun Dafa practitioner A, female, 32 years old, was kidnapped and sent to the No. 4 team in Beijing's Xin'an Forced Labor Camp (also called the Beijing Female Forced Labor Camp) in July 2001. She has resisted the vicious persecution. For two months, she refused to wear the labor camp uniform, since she is not a criminal and did not commit any crime. She was handcuffed at all times. The camp officials locked her inside the interrogation room, and assigned four people to watch her every day. Labor camp guard Li Jirong forbade her to sleep, take a bath, wash her face and brush her teeth, or use the toilet. At each meal, she was only given a plain and tasteless steamed cornmeal bun made of only corn flour and water [no salt, sugar and oil are added] and some pieces of pickled vegetables. She was beaten every day, so her nose often spurted blood, her eyes were black and blue and swollen, and she had bruises all over her body. Even under this kind of torture, whenever she had a chance to go outside she would shout loudly in the exercise yard, "Falun Dafa is good!" which moved people's hearts. Two months later, guard Li Jirong sent her to the "Extensive Training Team," where she was detained in a small cell. Inside the cell, she could see no light. The door of the cell was always open in winter, so the room temperature was extremely cold. Furthermore, she was handcuffed inside the room in a position in which she could neither stand straight nor squat down. The walls, ceiling and floor of this small cell were covered with some type of electrified needles. If she tilted her body even a little and touched any part of the wall, ceiling or floor, she would receive a shocked by the electric needles. When she was exhausted and sleepy due to the forced long-time sleep deprivation, she was often shocked by the electric needles lining her cell and beaten by the guards. She had needle puncture marks all over her body and her skin looked like a sieve.

She is still being detained under these horrific conditions at the "Extensive Training Team." 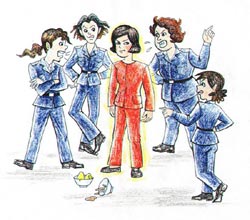 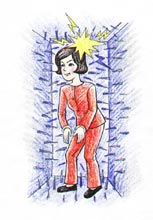 Falun Dafa practitioner B, female, 58 years old, comes from Beijing. After she was kidnapped and sent to Beijing's Xin'an Forced Labor Camp in June 2001, she not only resisted the brainwashing, but also openly introduced Dafa in her class and team and clarified the true facts of the persecution. Because of this, guard Li Jirong ordered some people to beat her. One month later, she was sent to the "Extensive Training Team" and put into the dark small cell, where the electric needles were installed all over the walls, ceiling and floor. Inside the tiny cell, she was badly beaten up and shocked and stuck by the electric needles. 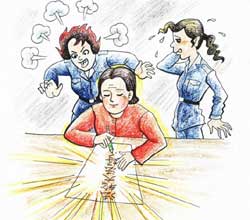 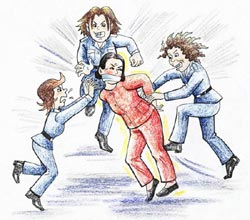 Falun Dafa practitioner C, female, 48 years old, comes from Yanqing County in Beijing. She was sent to No. 4 team of the Xin'an Forced Labor Camp in April 2001. She has resisted the brainwashing. The guard Li Jirong forced her to stand at a corner of the hallway and forbade her to take a shower, wash her face, brush her teeth, or use the toilet. Li Jirong also instigated others to brutally beat her, force her to squat, kneel, or "fly" (see picture below). Two months later, she shouted during a sports session, "Falun Dafa is a the righteous way of cultivation." Li Jirong handcuffed her right away, and then sent her to the small dark cell for further interrogation and torture. On the phone, Li Jirong also threatened and verbally abused her family members; Li Jirong claimed that she would extend the practitioner's term by half a year. Now the practitioner is still enduring persecution in the labor camp. 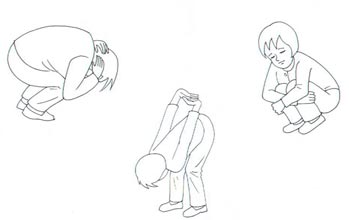 Dafa practitioner D, female, 54 years old, was arrested and brought to the Xin'an Forced Labor Camp in September 2001. She resisted the brainwashing and was cruelly tortured by guards Li Ziping and Li Jirong. The guards also instigated the inmates to beat her, and did not allow her to live normally. During a morning drill, she shouted, "Falun Dafa is Good" and "Falun Dafa is a righteous way of cultivation." The guards immediately covered her mouth and brutally beat and kicked her. The guards then handcuffed her and imprisoned her inside a utility room that provides water; she was squeezed under the sink and forced to remain there. Her ankles swelled and became as thick as her thighs. Even under this condition, the guards still forced her to do extremely heavy labor without any rest. She was forced to do all the dirty and heavy work. The guards also directed other prisoners to brutally kick her while she was working. 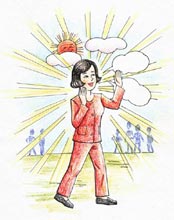 “Practitioners on Trial For Tapping into Cable TV in Changchun Exhibit Courage and Righteousness in Court; Police Openly Shock them with Electric Batons”