We got off to an early start and headed to a shopping center where the celebration was held. There was a constant flow of people from the start. Even before we officially began the ceremony, one young woman expressed much interest, allowing us the opportunity to clarify the truth to her while she watched some of the others present the exercises. Afterwards, she asked to sign the petition. 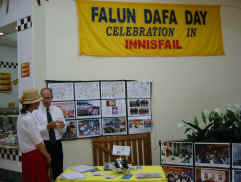 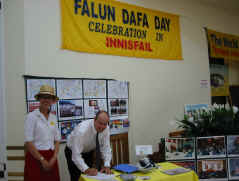 Mayor Barry Moyle arrived at 2pm. His disposition was very positive, expressing his support of our activities. He was genuinely interested to learn more about Falun Dafa. We spoke for about forty minutes, giving ample time to fully clarify the truth to him. Afterwards, he signed our Proclamation and confirmed that he would forward the same on his official letterhead and also a Certificate of Appreciation.á

The overall reception of the community was very positive. Many were keen to learn the exercises and even left their contact numbers in case of a future workshop. We were able to clarify to many people the truth about Falun Dafa. 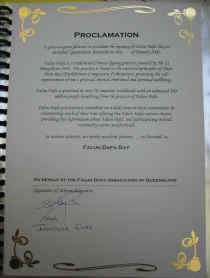