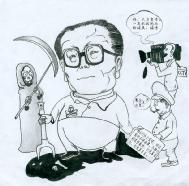 The man in uniform with cigarette: We will use the "Three Elimination" policy. [Note: physically, mentally and financially eliminate Falun Dafa]

The paper held in his hand is written with the words: Tell the "610 Office": There is no law in regards to Falun Gong. Send those who refused to be reformed to a labor camp. If they are beaten to death, they are officially declared as committing suicide.)