Prefecture of the Region of Guadeloupe

I have indeed received the file, which you sent to me concerning the repression organized against the Falun gong practitioners, which I read with care.

I have indeed noted that the Minister of Foreign Affairs had already been made aware of this issue. Nonetheless, I propose to myself to transmit to him the documents that you have transmitted to me.

I wish you, Sir, Madam, all the best.

The Prefect [note: French official in charge of a prefecture -- trans.], 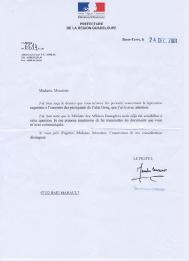 “Clarifying the Truth in Linkoping, Sweden”