As friends and fellow Falun Gong practitioners of Xiong Wei, we were shocked and saddened to hear that she was arrested on January 5th, 2002 in a Beijing street and transported to the Quinghe Detention Center in Beijing merely because she practices Falun Gong and wanted to inform the rest of public about the truth of the persecution. 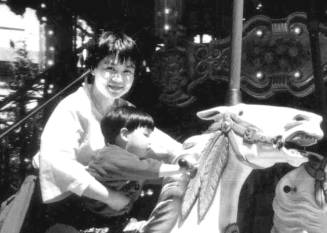 She was arrested out in the open while she distributed information flyers about the persecution and the truth of Falun Gong to her fellow countrymen.

Xiong Wei studied Industrial Engineering in the specialty 14 at the TU in Berlin, between 1993 and 1999. In 2000 she obtained a position with the German Buderus A.G. at their offices in Beijing. She decided to return to her home country and work in Beijing.

She has practiced Falun Gong since 1997. Falun Gong, also called Falun Dafa, is a high-level qigong practice, a cultivation way that ennobles people both physically and spiritually. Millions of people around the world have found better health and inner peace through the practice of Falun Gong. It teaches people to improve one's morals, to turn toward the good, to find fault in oneself and to practice the principles of "Truthfulness, Compassion and Forbearance."

But the Chinese government rulers feel threatened because the number of practitioners had risen to 70 million. Falun Gong was banned in China in 1999 and the system and its followers have since been persecuted. In the meantime, at least 343 practitioners have died from tortures while in police custody in various places. After the New Year, the persecution was once again intensified.

After Xiong Wei's arrest, the police searched her home. At present she is held at the Qinghe Detention Center. Her family is forbidden to visit her.

We, her friends and fellow practitioners, remember Xiong Wei's readiness to help and her friendly manner. Such a nice young person ought not to be incarcerated. We want to jointly support her and help her, so that she can be released as soon as possible from this unjust situation. That's why we have initiated a team effort "Help for Xiong Wei." We will have an information table at the entry to the Mensa, Monday January 14th, 2002 to Friday, the 18th of January, 2002, daily from 10:30 A.M. until 3:00 P.M. daily, to tell the public about her case.

We cordially invite you to come by our information table. Your presence would mean a valuable show of support for your former student. A letter of support from you would be of further help. Uncovering and publicizing some of these cases around the world in the past few months and baring the lies made it possible for many practitioners to effect their release. Not too long ago a young Falun Gong practitioner was released, largely due to interventions from abroad.

Every action helps. Dear Mr. President, we would be very happy if you could support us, and thank you. We are happy for the chance and the freedom and opportunity here at TU to appeal for our friend Xiong Wei.

“"Just by Having Your Heart Unaffected, You Will Be Able to Handle All Situations"”