On Sept. 12, 2001, the City Council of Jersey City, New Jersey held a meeting in City Hall. All nine council members unanimously passed a resolution condemning the violence and repression against Falun Gong practitioners in China. Practitioners from Jersey City and cities around New Jersey were invited as guests and gave speeches.

In his speech, the representative of the practitioners first expressed our deep regrets, mourning the innocent lives of New Jersey residents lost in the disaster in Manhattan, which is just across the river from New Jersey. He extended practitioners' heartfelt condolences to their families and friends. He also briefed the Council members on the brutal crackdown of Falun Gong practitioners in China, especially in Nantong, the Sister City of Jersey City. He was very appreciative and thankful that the city council was upholding justice and condemning evil. The practitioner also introduced the effects of Falun Gong on health and physical fitness and in elevating the moral standards of practitioners. He also mentioned the awards and proclamations that Master Li has received from the governments and the people all over the world, as well as the fact that Falun Gong is also being taught in Jersey City. The speech won applause from the City Council members and meeting attendees.

Office of the City Clerk

The Council as a whole offered and moved to adopt the following resolution:

Whereas, the Falun Gong is a body, mind and spiritual practice that offers great health benefits which is free and open to the Chinese people; and

Whereas, Jersey City is engaged in a Sister-City relationship with Nantong, China where recent acts of violence and torture of Falun Gong practitioners have been reported; and

Whereas, the United States Department of State condemned the action by the Chinese government asking China to respect freedom of thought, conscience and religion and to allow all persons to practice their religious beliefs freely; and

Whereas, the Municipal Council of the City of Jersey City joins the United States Department of State in calling on the Chinese government to release from so-called "re-education through labor camps" practitioners of Falun Gong and others held for exercising their fundamental human rights.

Now, therefore, be it resolved, that the Municipal Council of the City of Jersey City, condemns the violence and repression against Falun Gong practitioners in China.

Be it further resolved, that the City Clerk is directed to forward copies of this resolution to the Mayor of the City of Nantong, China and members of the United States House of Representatives representing Jersey City. 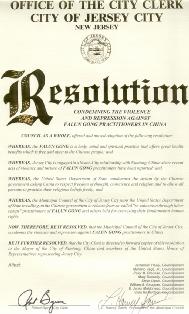 “The Importance of Keeping Righteous Thoughts at All Times ”