The State of Wisconsin

Office of the Governor

Whereas, Falun Dafa, also known as Falun Gong, was developed in China in 1992 and is an ancient form of qigong self-cultivation practice, a way to refine the body and mind through special exercises and meditation and the cultivation of the three fundamental principles of Truth, Compassion and Forbearance; and

Whereas, those who practice Falun Dafa do so out of a desire to enrich their own lives and the lives of those around them; and

Whereas, more than 100 million people around the world reap the benefits of practicing Falun Dafa ranging from improved health and new found energy to mental clarity, stress relief and peace of mind; and

Whereas, in July 1999, the leadership of the Chinese Communist Party implemented a brutal persecution against Falun Dafa deeming it a threat to Party control; and

Whereas, Falun Dafa practitioners persecuted in China have shown tremendous courage and dignity in standing up against the regime that oppresses them by upholding the principles of their practice; and

Whereas, Falun Dafa practitioners and supporters in Wisconsin and around the world have sought support for the practitioners persecuted in China in hope for a more peaceful and just China; and

Now, Therefore, I, Scott McCallum, Governor of the State of Wisconsin, do hereby commend the practice of

and those who practice it in the State of Wisconsin.

In testimony whereof, I have hereunto set my hand and caused the Great Seal of the State of Wisconsin to be affixed. Done at the capitol in the City of Madison this thirteenth day of August in the year of two thousand one. 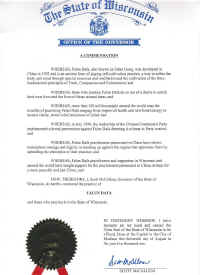