Breaking Through the Lies of the Chinese Consulate

[Minghui Net] This April, the Chinese Consulate General in New York sent a letter to the governor in Connecticut requesting him to retract the proclamation for Falun Dafa Week that he issued last December. The letter was also full of lies slandering Dafa and sheer nonsense saying that issuing a proclamation pertaining to Falun Gong would hurt the Chinese people's feelings, etc.

Not knowing all the facts, the governor's office replied with a letter expressing its regret for "upsetting the Embassy," but stating that they would not retract the proclamation.

After a practitioner learned of this matter he immediately contacted the governor's office. According to what the person in charge said, this kind of letter was only a routine response. Whenever there is a disputed proclamation, they will send out this kind of letter to show their neutrality. They also said that if they wanted to request such a proclamation again in the future, they would need to pass an investigation from a certain legal department.

The practitioner immediately pointed out that this issue does not belong to a regular citizen-to-citizen's dispute of some proclamation; it is Jiang Zemin and his followers' persecution against "Truthfulness, Compassion and Tolerance" and it has trampled on human rights and freedom of belief. Nobody needs to apologize to wicked people because they are supporting what is good. Such behavior from the Chinese Consulate General in New York was not only interfering with another country's internal affairs, it was actually the evils forcing people to approve its persecution of the good. The government offices in America should firmly resist this.

Later on, we realized that we had not done well enough on this issue and had failed to explain in a timely manner what is happening in China to the governmental offices. As for the investigation, the more people involved the better; we should use it to better promote Dafa and explain the truth.

Some of the newspapers in the capital city in Connecticut reported on this event. Some local newspapers also reprinted this article. At that time, a northeastern seashore city named Gronton announced May 14 to May 22 as Falun Dafa Week. The local newspaper gave it wide publicity by praising the stand that Gronton has taken, further introducing Dafa. There were people coming to learn the exercises every day during our 7-day free exercise-teaching seminars. Thus, a practice site was established in Gronton.

In the meantime, we sent a letter to the governor and mailed him the materials about how a mayor in California had resisted the Chinese Embassy. We also mailed him the "Falun Gong Real Story I and II" booklets, the "Human Rights Report," the "Truth about the Immolation" and the journal "Compassion." The people in the legal department reviewed these materials and passed on the truth to the governor's office. Soon, the governor's office called us saying that they would welcome our request for a proclamation again this year and expressed that they will be very happy to issue the proclamation to us.

This time, our materials fully introduced the magnificence of Dafa and the courage of Dafa disciples. Now, the governor of Connecticut once again announced June 29 to July 5 as Connecticut Falun Dafa Week. It is also the same time that the Boston practitioners are passing by the state of Connecticut on their walk to Washington DC. Some of the major newspapers have already interviewed us. This year's Dafa Week in Connecticut will let more kindhearted people know the truth and will be able to make a clear distinction between right and wrong.

We would like to express our heartfelt appreciation to the governor of Connecticut. His just decision will surely bring a wonderful future to the people under his leadership.

We also want to sternly warn the individuals who do not engage in honest work and cannot differentiate good from evil in the Chinese Consulate General: Your position and salary are given to you by the Chinese people. The ordinary Chinese people are the source of the basic necessities of your life. Among those are also countless Dafa practitioners. You spend the salary given to you by the people and use it to slander and persecute kindhearted people abroad. Where has your conscience gone? You may get temporary benefits in your career from Jiang Zemin, but do you know how long he will be in power? 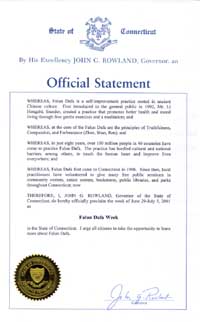