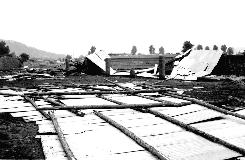 This photo shows a family's 40 cattle shed blown down by the wind.

At 8 o&#039clock, June 26, a force 8 wind accompanied by torrential rain suddenly attacked three counties (Pinggu, Shunyi and Miyun) in the suburbs of Beijing, causing heavy losses to the local economy.

As reported by Beijing Youth, the meteorological record of that night released by the Pinggu meteorological station indicated that the rain measured 17.2 millimeters, and the average force of the wind was 8th degree, with the highest gust at 11th degree. These were the highest recorded wind gusts since the meteorological station was built in 1954. This unprecedented heavy wind hit more than 33.5 thousand mu (Chinese unit of area, about 2.2 thousand acres) of fruit trees, causing 20%-30% of the fruit to be blown off and thousands of trees to be damaged. The loss of fruit will be as high as 9 million kilograms. Moreover, 13.2 thousand trees between the fields and roads, as well as 216 electrical poles, fell in the wind, and 2,005 houses were damaged by the heavy wind and rain. The estimated area of damaged vegetables was 6,200 mu.

This wind was the roaring of the heavens over the bestial conduct of the Beijing policemen who have wantonly abused female Falun Gong practitioners. The force 8 heavy wind is a signal of retribution for all the crimes of the beasts in human clothing and a warning to all the ignorant people: "If they don't come to realize it, then the real catastrophe(s) will begin." (Dafa is Indestructible)

“Short Stories About Clarifying the Truth”