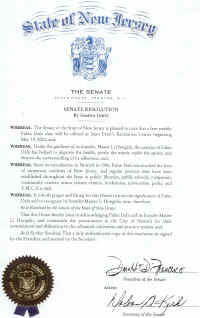 The Senate of the State of New Jersey is pleased to note that a free weekly Falun Dafa class will be offered at Saint Peter's Recreation Center beginning May 19, 2001; and,

Since its introduction in Newark in 1996, Falun Dafa has touched the lives of numerous residents of New Jersey, and regular practice sites have been established throughout the State in public libraries, public schools, companies, community centers, senior citizen centers, bookstores, universities, parks, and Y.M.C.A.s; and,

It is both proper and fitting for this House to note the significance of Falun Dafa and to recognize its founder Master Li Hongzhi; now, therefore,

Be It Resolved by the Senate of the State of New Jersey:

That this House hereby joins in acknowledging Falun Dafa and its founder Master Li Hongzhi, and commends the practitioners in the City of Newark for their commitment and dedication to this advanced cultivation and practice system; and,

Be It Further Resolved, That a duly authenticated copy of this resolution be signed by the President and attested by the Secretary.

Secretary of the Senate