Certificate Honoring the Journey to Zhen-Shan-Ren from Nashville, Tennessee 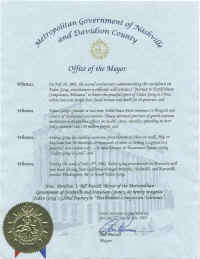 On July 20, 2001, the second anniversary commemorating the crackdown on Falun Gong, practitioners worldwide will initiate a "Journey to Truthfulness, Compassion, Tolerance" to honor the peaceful spirit of Falun Gong in China where innocent people have face torture and death for its practice; and

Falun Gong has enabled numerous practitioners in China to walk, bike, or bus/train ride for hundreds or thousands of miles to Beijing to appeal in a peaceful, non-violent way -- to raise banners in Tiananmen Square saying "Falun Gong is Good"; and

During the week of July 15th, 2001, Falun Gong practitioners in Tennessee will join those driving from California through Memphis, Nashville, and Knoxville toward Washington, DC to honor Falun Gong.

I have hereunto set my hand on