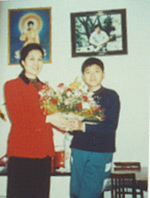 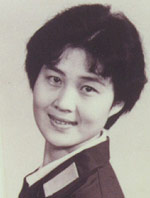 Dafa practitioner Han Yuejuan, about 41 or 42 years old, was previously the director of the Theory Office in the Propaganda Department of Dongshan District in Guangzhou City, Guangdong Province. Her husband used to be a UN Observer and died of epidemic disease 10 years ago during a peacekeeping mission. Since her husband was declared a UN Martyr, Han received a pension from the UN to support herself and her 5-year-old son. After her husband's death, Han was very sad and often went to her husband's tomb and cried there. Because of the severe mental and physical pain, she ended up with several illnesses, and could not go to work. In 1993, with the strong recommendation by her husband's friends, Han started to practice Falun Dafa. Soon after her practice, all the illnesses were gone and she became energetic and looked much younger. She often said, "It is Falun Dafa that saved my life." Since then, she became more active in introducing this unprecedented, great Buddha Law to people.

After July 22, 1999, Guangdong police considered Han as a person in charge for practitioners in Guangdong. She was secretly detained in a building in Penglai Street on Dezheng Road in Guangzhou for 83 days. Although isolated from the outside, Han was not terrified by the vicious force that was spreading everywhere. With a strong, determined heart toward Dafa, she kept spreading Dafa and speaking out the truth to the police officers interrogating her, with rationality, wisdom and benevolence. Some police officers left and some others arrived, and they came batch after batch. These police officers then reported to their supervisor, "Han is a nice person, and she won't harm the society in any way. Please let her go free." After the 83 days, the interrogating records had accumulated into a large pile, but all proved Han was innocent. Thus, she returned to work. She then wrote many letters to government officers of different levels and UN Secretary-General Annan. In these letters, she described the mistreatment that she had received, as well as speaking out that Falun Dafa was innocent. The police followed her closely to keep watch on her, with a police car parked at her place. With this escalation of persecution, she was reduced to a lower position as a receptionist. Later, she was transferred from the Propaganda Department to the Sanitation Bureau for routine hygiene inspection. Although it was a position that nobody liked due to its always dealing with dirty places, Han gladly accepted it. Her supervisor at the Sanitation Bureau became deeply trustworthy toward her due to her strong working abilities.

In late December 2000, the vicious force constantly pressured all work units to prevent more practitioners from going to Beijing. Under the pressure from above, the Sanitation Bureau planned to forcibly detain Han, so that they could keep watch on her 24 hours a day. To resist this unlawful action that severely violated human rights, Han had no choice but to leave her home. Guangdong police offered a reward of 90,000 Yuan RMB to capture her. On June 7, or June 8, Han's family suddenly lost contact with her, and nothing was known about her whereabouts. On June 23, Minghui Net reported that police broke into her place and arrested her at Yifangyuan in Xilang of Fangcun, Guangzhou. She is currently detained and being tortured in Tianpingjia Detention Center in Dongshan District in Guangzhou.

Right now, Han's elderly parents and young son (less than 15 years-old) have to support themselves. We hereby appeal to the UN Secretary-General Annan, human rights organizations, and all kindly people around the world to pay close attention to Han's situation. Please help the family members of a commended UN martyr.